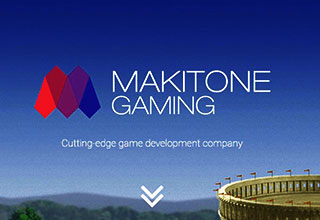 Makitone Gaming is a relatively new online casino software company that hails from Estonia, and we’re pretty sure you haven’t had the chance to hear of them, as the number of operators that feature their games is still small.

Still, the number of licensees is constantly on the rise, so chances are one of Makitone’s games will be headed your way sooner or later.

The portfolio of games is very small here, especially when you compare these guys to some of the industry giants such as Microgaming or Net Entertainment, but that’s not that important, as over here we have a handful of top-notch games.

It’s worth pointing out that Makitone Gaming aims at mobile punters first and foremost, as all of their games utilize some of the latest technologies available, and you can try their games on Android, iOS, Blackberry, and Windows devices. Still, if you prefer gaming on a laptop or PC, you needn’t worry, as these older platforms are covered, as well.

The main focus is on quality and not quantity, and all of the games can easily be integrated into any existing online casino platform.

The themes included over here are quite diverse, as they include Norse tales, mobster movies, and even some Ancient Rome thrown in for good measure.

All of the slots feature five reels and 25 paylines to play with, but each game has its own unique symbols and bonus games. If you try them all you might notice that the games actually feature the same mechanics. Some players might not like this that much, as the gaming experience tends to be way too similar when compared between all five games.

Nevertheless, let’s give you more info on the games themselves, shall we?

Caesar’s Triumph - Leading you back to the times of Ancient Rome, when the great Ceasar ruled the world.

Secrets Of A Geisha - This one is heavily themed after Japan and its rich heritage and culture, providing you quite a Zen-like gaming experience.

Vikings’ Victory - Are you up for some invading? This is a truly masculine game where it’s all about bearded warriors of the Norse world.

The Gang Job - Did you grow up watching The Godfather movies? You will surely love this one, then.

All things considered, these guys only have five games under their belt so far, but still, all five of those are true little gems. Obviously, they’d put a lot of effort into these games, and it shows, so we predict them a bright future.

They simply can’t compromise the quality and potential they’ve shown so far, as that’s the only thing that will launch them up to stardom.