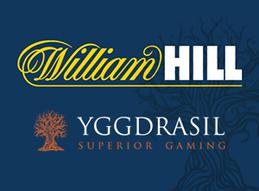 Getting content distribution deals is a very important part of any online casino software company's overall strategy. Getting deals like this with some of the biggest names in the history of the industry, however, is something else entirely. This is exactly the situation that Yggdrasil Gaming finds itself in after a new deal has been announced with William Hill, a company with over seven decades of experience in the gambling world.

The important thing to know first about this deal is that it has been made with Yggdrasil Gibraltar, which is a licensing they received last summer. Since then, this is the fourth major operator who has signed on through this licensing for the software company, and that's an impressive rate.

For this deal, William Hill will be taking on the complete selection of slots from Yggdrasil, but they will also be taking on other tools from this company. This includes both BRAG, their social networking sharing tool, and BOOST, their interface for putting together in-game promotional tools. These are both key parts of the appeal of these games and what helps to make them stand out from the crowd, so it's a good thing that they are being brought on as well.

It's obvious that this is a good deal for William Hill. They are already a huge name, but now they have even more high-quality titles added on. For Yggdrasil, however, it's a really big deal because they are adding on one of the biggest names in the entire history of both the online and land-based gambling industries. This is a big vote of confidence from a major name, and it really puts an exclamation point on the past several months of new content distribution deals they have received since getting their Gibraltar license back in June.

In any event, they are continuing to expand at an impressive pace, and it'll be interesting to see who joins on next. They have the rest of the year ahead of them to add on new names, and they're on a pace to become one of the most widely used software packages in the industry.