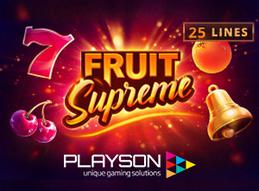 Game developer, Playson, has announced a new title that will extend their Timeless Fruit Slots series by yet another entry.

The series is a collection of games in the classic fruit machine tradition, featuring classic gameplay and fruit symbols.

Games such as Fruits & Jokers and Imperial Fruits are part of this series that now has a new and fresh entry featuring the same kind of uncomplicated gameplay and satisfying old-school design.

Turning Up the Heat

The name of the game is Fruit Supreme: 25 Lines and in a press release, the company stated that it is excited to introduce the latest incarnation of the Timeless Fruit series and also added that behind the classic fruit styling there is robust and modern gamification.

The 4x3 game with 25 paylines features symbols in a photorealistic style, as well as the classic bars, bells, and lucky 7s.

And when there’s a win, the fruits get set on fire.

“Fruit Supreme: 25 Lines is a dynamic new take on our classic fruits style slot and deserving addition to our Timeless Fruit Slots series.

“We have capitalized on our growing games portfolio with a series of a significant operator in new markets integrations, and we are sure Fruit Supreme: 25 Lines will prove a big hit with both our new and loyal players.”

Further affirming their belief in the release, the company stated on the website, “our newest slot is sure to turn up the heat on a sizzling season of Playson releases.”

It’s been a hot August for the developer…

…as news broke of them completing a tough security audit by the Swedish igaming regulatory body.

Completing the audit which included rigorous testing of its engineering, integration, and product departments now make the company fully certified in the recently regulated but highly desirable Swedish market.

Recently, the company has also extended its presence in the Italian market by signing a deal with leading casino-operator Betlfag.

The deal lets the developer strengthen its foothold in the Italian market which they entered two years prior.

Representatives from both companies were both thrilled at this partnership as Playson games are very popular among Italian punters.

The developer's last release was Solar Queen, a slot with an Egyptian theme featuring progressive multipliers and a flaming frame system which guarantees the appearance of wild symbols every 10 turns.

A leading game developer and casino supplier that supplies its certified and tested content worldwide. It operates on regulated markets of Malta, Italy, Spain, Sweden, the UK, Romania, and others.

Their catalog currently consists of more than 60 omnichannel games which are HTML5-based and mobile-friendly.

The company is based in Malta with offices located in Ukraine, the United Kingdom, and Greece.