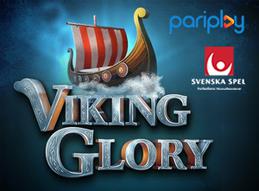 The developer first partnered with the state-run gambling company in May when their whole catalogue of games and offerings became available on the operator’s sites.

Now the Norse-themed game from Pariplay will be exclusively offered by Svenska Spel Sport & Casino to punters in the recently reformed Swedish market where the state-run gambling provider has been dominating since it’s January 1st launch.

“We’ve enjoyed a fruitful relationship with Pariplay since partnering with them earlier this year and our customer base has been extremely engaged with their catalogue of games. The developer is renowned for its diverse collection of gameplay experiences and Viking Glory builds on that tradition with an exciting theme that is sure to captivate our players.”

Commenting for the software supplier, Richard Mintz, Commercial and Marketing Director expressed excitement for the opportunity to share their catalogue of games with the Swedish audience and called partnering with the operator a “true privilege.”

“Now we’re thrilled to bring them Viking Glory through an exclusive partnership that will continue to build our presence in this emerging market while working with Sweden’s top gaming operator,” he concluded.

The slot game which will be offered exclusively through the state-run operator is a tribute to Norse culture and the fateful expeditions of 8th century Vikings.

Featuring high-production-value in its graphics and sound it’s a heart-pumping experience that will create excitement and joy.

The game is the most feature-filled from this developer yet…

…as it has three different kinds of extra spins and a randomly activated bonus feature in the base game.

The randomly activated feature can give punters respins, credits, turn a whole reel wild, or give a multiplier.

The extra spin features all have their own gameplay twists keeping things fresh and interesting. The Viking Shield Wall has players collect bow and arrow symbols to shoot down the shields which hide money prizes behind them.

Viking Trade is all about multipliers represented by money bags. The entire win from the mode is increased by the cumulative multiplier.

…Viking Wild Strike can turn whole rows wild when it appears on the last reel.

Svenska Spel Sports & Casino is the Swedish state-run gambling operator which offers casino games and sports betting to the newly reformed Swedish market. They have enjoyed an increase in growth this year with their H1 2019 revenue showing a 5% year on year increase.

Founded in 2010, it has offices in Tel Aviv, Sofia, Gibraltar, India, and the Isle of Man. It has recently obtained a Romanian iGaming license allowing it to spread further into the Eastern European markets.