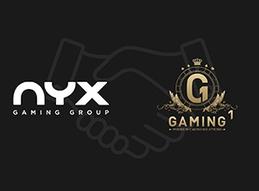 On Monday it was announced that Belguim-based GAMING1 had inked a deal with Scientific Games' subsidiary NYX that will facilitate the release of the company's games portfolio over the NYX OGS™ (Open Gaming System). The HTML5 Content, including four table games and 15 slots will be integrated into the OGS making it available to more than 200 operators worldwide in regulated markets soon.

Mybet Casino will be the first to receive the games including the 243 Way Fakir Dice Slot, one of the company's most popular titles so far. More online casinos will pick up the content over the coming weeks. The first casino to carry GAMING1 slots noticed by Games and Casino reviewers was the Romanian licensed Circus Casino.

Sylvain Boniver, CEO of GAMING1 noted that the new partnership with NYX Gaming Group is a very positive step in their commitment to an expanding presence in regulated markets. He added, "We look forward to enjoying a close relationship with them, and I am sure our games will grow to be a core part of their offering."

NYX Gaming Group VP of Casino, Dominic Le Garsmeur said: "We have been impressed by GAMING1’s diverse range of titles for both international and local markets, and we are delighted to be able to provide them to our operating partners.

“NYX OGS offers a broader reach in terms of customers and jurisdictions than any other truly open network. Our close relationship with providers like GAMING1 ensures OGS remains the premium platform solution for the gaming industry."

GAMING1 has been seeing quite a bit of press lately with reports mostly centered on the company's commercial expansion. Most recently they were seen to have struck a joint venture partnership with Colombia's Vicca Group giving them a 50% share in the country's first internationally controlled online casino and sportsbook. In that deal, GAMING1 supplies the platform to carry live dealer streams and casino games from other top developers such as Aristocrat alongside their own games.