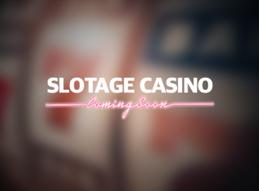 The newest online casino to debut is Slotage Casino. They're offering a tremendous selection of games upon the time of their launch, but they also have a license from Curacao. This is the sister site to 7 Gods Casino, a site that many of our readers may have played with before, and they have quite a bit to offer players who are looking for good deals and a ton of titles.

The software available at this site is the reason why they have so many games available. More than 1,500 games are up for grabs including titles from Microgaming Quickfire, Net Entertainment, BetSoft and other major names in the industry. On top of that, they have a great mobile casino option that's easy to connect with no matter what kind of device you have, and their instant play option can be played with both Mac and Linux in addition to Microsoft Windows. It's clear that flexibility is the name of the game with this new brand.

Something that makes this game stand out on a conceptual level is the idea of the player traveling through mythical cities to take part in their favorite games. This includes Camelot, El Dorado, Atlantis, Asgard, Shangri-La and others. It's a different spin on the journey concept that we have seen sometimes, but it's made a source of value for players in more ways than one since they also have plenty of ways for players to earn loyalty points during their virtual travels that pile up over time and turn into serious bankroll-backing power.

What you can expect from Slotage Casino is that they are going to be set up to try to gain the trust of players from the time they open their doors. With their excellent selection of games that they're coming with right out of the gate, they will definitely be on the right path from the beginning. There's a ton of potential here to be a major competing brand, and we're looking forward to seeing what they're able to bring to the table and how their in-depth loyalty program and city-traveling theme works out for players.