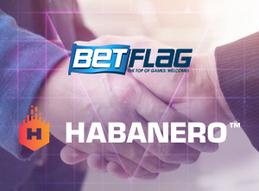 Provider of online casino games and content, Habanero Systems, has announced a supply deal that will strengthen its position in the Italian market.

Italy is highly lucrative for casino operators and content providers and this new deal will help the supplier make a stronger foothold among Italian gamblers.

Under the terms of the deal, Habanero’s full library of Italy-certified games will go live with Betflag.it. What this means for the locally certified operator, is that their customers will soon get access to such acclaimed titles as Jump!, 5 Lucky Lions, and Ways of Fortune.

Giving his opinion on the partnership with Betflag, Arcangelo Lonoce, European Head of Business Development, said that the operator is among the fastest-growing in the Italian iGaming scene and they cannot wait to roll out Habanero titles on the website allowing them to “sit along” offerings from some of the industry’s biggest providers.

On the side of the Italian operator, Dario Rusconi, Head of Casino at Betflag, said that they consider it important that their players are provided with “fresh and quality content and we have certainly ticked both boxes with this deal.”

Rusconi further praised Habanero on knowing “exactly what it takes to tailor their content to specific markets” and also pointed out that the casino games and slots offered have something for everybody.

This announcement is the continuation of the developer’s plans to expand its footprint in Europe. Over the last 18 months, the company has inked a number of deals with leading operators and content producers that served to solidify its presence across regulated markets, including Italy.

Habanero has first entered the Italian market in early 2018…

…when they signed a deal with planetwin365, one of the best-known online casinos in the country.

They further expanded into the market with partnerships Stanleybet and a local gambling company Microgame.

Wild Trucks Barreling Down the Reels:

This announcement comes shortly after the developer released Wild Trucks, a game inspired by the world of street racing and trucks.

It’s a game for lovers of racing and speed and fans of unusual special features and the supplier has tried very hard to capture the spirit and vibe of street racing.

…is that winning combinations pay even if they don’t start on the leftmost reel.