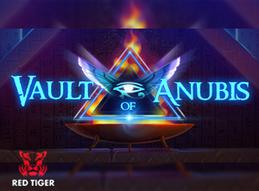 It comes packed with numerous special features. The luck will decide will they help the players to score better wins, but one thing is for certain - these bonuses surely make the gameplay more interesting.

...the lucky players who can hold their nerves have the chance to win up to 5,000x their stake!
With medium to high volatility, this release is the great practice ground for all players eager to try out their slot playing strategies.

What Can You Expect From Gameplay And Features?

The grid has a 7x6 slot configuration and it is set in a vault guarded by giant statues of the mighty Anubis, the Egyptian dog-headed god. Regarding paylines, this game doesn't use conventional schemes when it comes to winning ways.

Instead, it has cascading reels, meaning the all symbols drop away and the grid fills with new ones on each spin. Any five or more matching symbols connected in blocks or along their edges will produce winning combinations. Nine paying symbols can appear, along with a wild that acts as others to complete combinations, and extra spins trigger symbol.

Words of Praise by the Developer

This Egyptian slot has already proved a big hit since it was exclusively released through LeoVegas network.

“Vault of Anubis is Red Tiger’s attempt at delivering a math model and feature set that the industry has familiarized itself with over the past few years, and repackaging it as a grid slot. We believe this combination is very engaging and the grid slot model allowed us to communicate the feature set very well.

The game’s popular theme and mechanic, coupled with the opportunity for a max win of 5,000x the stake, makes travelling back to ancient Egypt an adventure that’s truly worth experiencing.”

Vault of Anubis is the latest addition to Red Tiger’s award-winning portfolio of over 120 games as the company continues to grow its portfolio.