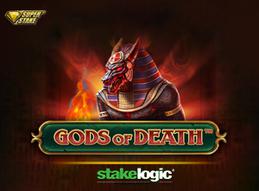 The ancient Gods of Egypt are rising again in the latest release from the innovative software provider Stakelogic - Gods of Death slot. In this 5×3 slot with 10 lines, the ominous deities await players on the reels.

To make the gameplay more interesting...

...they randomly conjure up their powers to change the reels and lead the player towards the magnificent treasures hidden inside the ancient tomb.

In addition to engaging special features and outstanding visuals, this slot is available at mobile casinos as well. The RTP of 96% is in the industry’s average, while the players can expect medium to high variance.

Super Stake and Other Special Features

The developer didn’t show a lot of innovation with the game’s theme since it has chosen the most repetitive one. We have seen it over and over again, in a good or bad edition by various software providers.

Still, while the theme is lacking originality and imagination...

... when it comes to the game’s components in a form of special features, the brand has gone all out.
Players can look forward to:

This slot is the latest game to incorporate SUPER STAKE - trademarked online slots innovation from Stakelogic. The original new game feature “gives players another shot after a losing spin, allowing them to place a side bet which effectively doubles their stake and enables an addition feature which delivers an insanely high payout approximately every 44 spins.”

Super Stake is already available in recently released The Expendables Megaways™, but the developer announced it will be also implemented in the forthcoming launches of Dragons and Magic™ and Runner Runner Megaways™.

“Gods of Death™ is an exciting addition to our slots portfolio, with a wealth of highly engaging features for our fans to get their teeth into.

The awesome Gods hold the key to a gameplay structure which can change in an instant, keeping players on the edge of their seat and wanting more. We’re confident this game, with the added incentive of Super Stake, will really deliver the power of the Gods”, he said.

Gods of Death slot is an animated video slot packed with all the game-changing features players can expect from a prominent brand like Stakelogic. Building on their flourishing reputation for developing compelling titles, this newest release it a great addition to the provider’s portfolio.

Source: “Enter the fearsome realm of the Gods with Stakelogic”. Stakelogic. March 16, 2020.