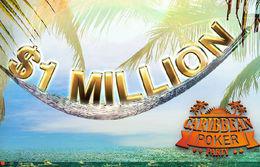 The summer is the time for taking vacations and enjoying the warm weather, and Party Poker has put together a massive promotion that allows you a chance to get a piece of $1 million in rewards with their own Caribbean Poker Party promotion. This is a tournament leaderboard promotion that ends with the literal poker party that will happen for a week at the Hard Rock Hotel & Casino in Punta Cana, Dominican Republic.

To enter this online poker promotion, all you have to do is play in the Power Series tournaments that have a buy-in of at least $109. The more you play and the better your performance, the more leaderboard points you'll earn. Each week for ten weeks will be a new leaderboard (running Monday through Sunday), and that means you'll have ten different shots at getting a prize package with ten being given away each week. That means 100 total prize packages are being given away worth $6,000 each in addition to other rewards.

What Does the Prize Package Include?

Party Poker has put a lot of thought into these packages, and here's what you get. First you get $1,000 for the flight to the party, and you get the buy-in for the Party Poker Million tournament. Moreover, you'll be given accommodation and meals straight from the Hard Rock Hotel & Casino in Punta Cana. What's more is that if you happen to pick up more than one package, you can sell it to someone else, so you're getting value either way.

There are few names in the industry that have a name that means as much as Party Poker's does. While they were once the number one brand in online poker before they had to scale back thanks to unforeseen complications after the UIGEA, they have remained one of the strongest brands in the industry, and they frequently have massive promotions like this one where they are giving away a tremendous amount of value. Tournament players should definitely be getting in on the action with this offer because it's a ton of extra value being added into games that they're likely to be playing anyway.