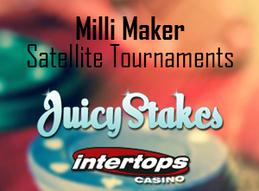 Many players who were interested in poker before the "boom" that started around 2003 will tell you that the Main Event of the World Series of Poker was so popular because the first place winner became a millionaire, guaranteed. After the event blew up, it was common for everyone at the final table to take down at least seven figures, and another tournament was born along the same lines. This is the Millionaire Maker event, and Juicy Stakes and Intertops Poker are looking to send a lucky player to this tournament.

The ultimate prize you're looking at with this is a $3,500 package. This includes the $1,500 buy-in for the tournament, which runs from June 10 to June 14, 2017. It also includes a six-night stay at a top-tier Vegas hotel for two, and you'll also get $500 for other expenses involved in getting there and back. The idea behind this event is that first place always gets a million dollars at a minimum, and second place will also get a seven-figure win if the prize pool is large enough.

The State of Online Poker

Online poker boomed and then dropped in popularity after events like the UIGEA and Black Friday (April 15, 2011) happened, but it's been steadily growing in certain markets since. While it hasn't necessarily seen online growth as much as some people would like, land-based poker has seen growth, and big tournaments like the World Series have seen more and more players each year. This is good news for the health of an industry that many thought was lost at one point, and we could eventually get back to the point that it was at with the major boom in the early-to-mid 2000s if things keep up at this rate.