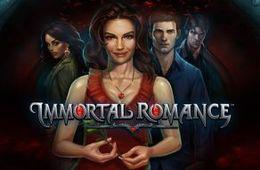 Crazy Vegas Casino knows as much as anyone that players like different types of events that test their luck and skill. With their Monthly Monster event, they have a different game that they choose each month for players to fight over €1,000 in prizes. This is a great way for players to get in on the action with slots, games that are typically seen as a player against the house, and instead, they're able to go head-to-head to see who has the best run at the game during that particular period.

Game Choice for This Month

The choice for this month's event is Immortal Romance, a classic by Microgaming, and it will run from Sunday, September 27 through Saturday, October 3. The game for the week-long event uses five reels and three rows with a 243-ways format that's full of action. It was one of Microgaming's first titles to have an in-depth storyline that unfolded as players continued through the action, and this led to a number of different free spins bonus features with different extras added on.

This game has an extremely high volatility, and that's really interesting in the tournament format because it has a big effect on the bet sizing strategies that players can use in tournaments like this one at Crazy Vegas Casino. The basic idea is that when you start running low on tournament points, if you haven't run up much of a total, then you should normally make a "Hail Mary" play and bet it all hoping to get lucky. With the super-high volatility in this game, it's even more interesting in terms of when to choose to go this route.

Crazy Vegas has been around for a long time, and their tournament schedule is full of events like this one that give players a chance to compete against other players in top Microgaming-powered games to see who can come out on top. Combined with their frequent promotions and other goodies, this is a site that gives players a great overall experience. Tournament players will love playing here, but even if you're not a big fan of tournaments in general, this one has a great €1,000 prize pool that will be distributed across the top 25 winners, so it's a good chance to win.