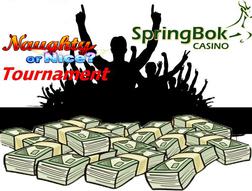 In gambling, a freeroll is a situation where you have an opportunity to win money without having to risk anything of your own. Along these lines, a freeroll online slots tournament is an event where you can compete for real money prizes without it costing you anything. This is the type of tournament that SpringBok Casino is putting on for players for the month of December with a prize pool of R99,999, which is worth just under $7,300 USD at the time of this writing.

Details on the Tournament

This tournament will last all through the month of December, and it'll be played on the Naughty or Nice online slot, which is timely considering it's about Christmas. You'll start off with 2,500 tournament chips for free, but you're allowed to add-on 5,000 more chips for R50. This is a great way to give players a holiday-themed event in what amounts to the largest freeroll that South Africa has ever seen, making history while giving players a ton of value.

About Naughty or Nice

The Naughty or Nice slot is produced by Realtime Gaming, and it has an animation style that stands out for giving the game an excellent visual appeal. It's also packed with features, including two different wild multiplier symbols. You can pick up a set of 10 free spins as well, and even though this game has been around for a couple of years now, it hasn't lost its initial charm because it was crafted to be a great game to play no matter what time of year it is.

Springbok Casino is the premier online casino that runs for South African players, and it operates using the Realtime Gaming software. This gives players a great selection of games using the South African rand currency, and it makes it really easy to have a great experience since they have customer service in both Afrikaans and English. They have put a lot into their promotions and events as well, and that's why you have a massive prize pool being put into this freeroll event where a lucky winner is going to walk away with almost six figures in rands.