Mermaid’s Treasure Contest at Intertops Casino Comes with a $120,000 Prize! 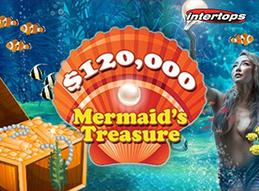 Known as one of the pioneers in providing top-quality online iGaming, Intertops Casino has once again prepared a special competition for its players. To celebrate the upcoming summer, the operator gives its frequent users a chance to participate in the $120,000 Mermaid’s Treasure casino bonus contest and score up to $500 on weekly draws.

The Intertops manager invited players to join with the following phrase:

“Playing slots is exciting and competing with fellow players for top weekly bonuses adds an extra level of excitement to it!”

According to the summer theme of the tournament, participating titles include a duet of underwater games - Mermaid’s Pearls and Megaquarium.

Finding and collecting Magic Pearls in the first release will trigger the exciting Shipwreck Bonus Pick Feature that hides instant cash prizes. There is also the extra spins feature with up to 5x multipliers.

Megaquarium comes with three bonus features and a Clown Fish wild that doubles wins, as well as multipliers. Both releases are developed by Real Time Gaming and have a big winning potential, highly engaging gameplay and provide a lot of fun.

What Prizes Players Can Expect and How To Qualify

June 8th marked the beginning of the $120,000 Mermaid’s Treasure Casino Bonus Contest with the end date on July 6th. Players who are frequently playing at Intertops will have a chance to collect points during gameplay, and users with the most accumulated points will be the winners of the biggest weekly prizes – up to $500 each!

Leaderboard prizes – 300 of them - are awarded each Monday, making it $30,000 altogether.
One of the top 20 weekly winners will get a chance to win another $1000 in a final draw, as a form of a special cash prize at promotion's end.

The best thing about this tournament...

… is that there are no wagering requirements!

Qualification for participation is quite simple - a player must deposit and play $75 to qualify for the weekly Monday bonuses and $25 or more each week for the Thursday draw.

Here are some more details about the offer:

Besides these rules, make sure to read the T&Cs page thoroughly since they apply to all promotions.

June Brings a Lot of Goodies

This platform has an excellent reputation as one of the trusted online gaming venues that take care of its players. As a salute to the new summer, that in the event already looks brighter and sunnier than the ones before, this content is just one of its many promotional June activities.

With the addition to new games, new tournaments, and some incentives you don’t want to miss. The new promos aren’t just for slot lovers. There's something special in store for the fans of table games as well - Blackjack Quest and Wanderlust XL - $4,500 GTD: a poker tournament that invites everyone to join the fun.

This is just a small part of the great promotions awaiting at the online venue that has once again raised above the competition with its premium offer. If you aren’t its member and you’re looking for a new exciting venue, make sure to check out this highly recommendable online gaming platform.