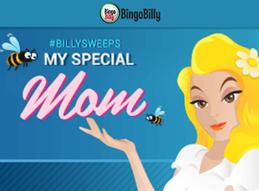 Starting on Tuesday, May 2, 2017 and running through Thursday, May 4, 2017, BingoBilly is hosting a special tournament event. This is in anticipation of Mother's Day coming up in the United States in around two weeks, and players have a chance to get a piece of a sizable $1,000 prize pool as a result. You can take part even if you play small stakes, which is a great way to keep as many people as possible in on the online bingo tournament action.

How This Leaderboard Event Works

There are three different leaderboards across the three days that this event runs. For every $20 that you spend on the special heart and love patterns in the event room from 4 pm to 8 pm Eastern, you'll get a tournament point. Each day, the top player on the leaderboard gets up to $200 depending on when they most recently put in a deposit. If they deposited the same day, then they get $200. If they lasted deposited in May, they'll pick up $100. If their last deposit was not in May, then they get $50 as well.

For second, third and fourth place, players will be able to earn between $10 and $50 depending on when they last deposited as well. On top of that, two different $25 prizes will be given with a raffle each day with any player who scored at least one tournament point qualifying for the prize drawing.

On top of that, players have some other specials they can take advantage of. There's one deposit bonus option where you can get up to 500 percent on your first deposit if you've never played for real money at BingoBilly. Aside from that, you can also earn a $30 free bonus just for signing up.

Bingo is hotter than ever before online, and BingoBilly is giving players a chance to take advantage. They always have cool promotions going on, but right now you can get paid for playing their special patterns leading up to Mother's Day with this tournament event. That's on top of the bonuses and other special offers that they have available.