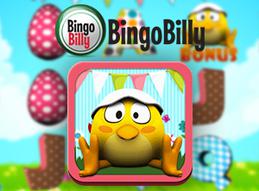 Slot tournaments are a great way to see how you stack up against other players over a period of time in a fun, chance-based game, and that's exactly what Bingo Billy is offering up right now to celebrate the release of the Crackin Eggs video slot. This tournament will give you a chance to win up to $100 with your play from April 10 through April 15 on this new game.

How to Get Paid in This Event

To win at this online slot tournament, you'll need to play the Crackin Eggs slot after making a deposit. There's a daily leaderboard with this event, and each day, you'll get $100 for the first and second players apiece. Third picks up $50, and a cool $25 is given to each player from fourth to seventh place. There's a new leaderboard each day from April 10 through April 15, so that's six days of action for a total prize pool in the four-figure range.

Leading up to Easter, players at Bingo Billy will have other opportunities to get paid as well. It starts with a $30 no deposit bonus that people can use as a sort of trial to check out the software and see how they like the games. On top of that, players can also pick up 500 percent on their initial deposit, which is a great way to drive your bankroll in the right direction in a major way before you even get started with real money play.

Bingo Billy has been running since 2005, so they have well over a decade of experience of giving players great promotions and awesome games to try. They've picked up lots of awards in the process, and they're recognized by industry experts as being one of the top online bingo brands running today. They have a good balance of bingo and slots, so they appeal to a wide range of players, and they have events and promotions for both sets of games. This helps them to keep things as flexible and inclusive as possible, which has been a major factor in their success.