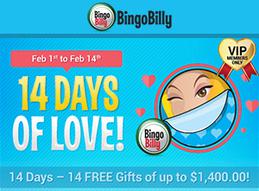 Just because Valentine's Day is right around the corner doesn't mean you can't have some fun on the side, and Bingo Billy has exactly what you need with a four-day slots tournament. The $1,400 Beloved Slots Tournament is running through February 11, 2018, and even if you get started late, you'll still have a fair share at getting extra payouts to pad your bankroll.

Details on This Event

This event is really like four different leaderboard tournaments in one because the boards reset each day with a different set of prizes. On each day of the event, you'll be able to earn points on a leaderboard for a piece of $350, and across four days, that adds up to $1,400 total that's being given away just for players to enjoy the titles they would be playing anyway.

First place each day is worth $100, and second gets $50. Third and fourth place each get $25 prizes, and fifth through 14th are given $15 apiece. You'll get two points for the tournament for every $14 that you wager on the day's featured slot, and you'll earn one point for each $14 you play through on all other online slots that they have available.

You'll get a cash prize if you have made a deposit for that particular day. If you've not, then you'll only get half of the prize, and it'll be in the form of a bonus. Either way, it's free money for playing games that you would have been playing anyway, so that's hard to argue with.

Bingo Billy is a big name in the online bingo world because they've been running since 2005. This gives them well over a decade of experience in giving players what they want in the form of great games and awesome promotions. They seem to have giveaways like this all the time, and they'll come up with any excuse to give away thousands of dollars to bingo and slot fans alike. This is one of the reasons why they have won so many awards, and it's also why they have such a strong base of loyal players who basically refuse to play anywhere else.