Yggdrasil Takes Players on a Fantastical Journey in Sahara Nights 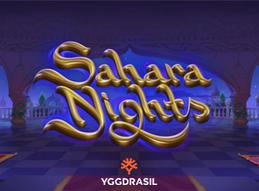 Game developer, Yggdrasil, is taking punters on a mystical journey through sands of the desert in Sahara Nights, a game based on the enduring story of Scheherazade and her many enticing stories.

Taking inspiration from one of the most popular story collections ever made, the developer aims to create an atmosphere of wonderment and mysticism as the night sets on the dunes of Sahara.

The developer known for games like Dark Vortex, Casino Cosmos, and Double Dragons is hoping to open sesame on another adventure that will delight punters while they spin the reels of this 5x3 game with 20 active paylines.

The story background of the game…

…makes references to a lot of Middle Eastern iconography players will recognize from TV and film. There is the fearsome sultan who Scheherazade is trying to pacify with her engrossing stories appearing as a special high-value symbol that pays out even when there’s only two of them.

The storybook itself appears as an extra spin symbol. Of course, every good Arabian fantasy story needs a genie so one is provided as well. He grants wishes by acting as an expanding sticky wild anytime there is a win line in sight.

Features wise the game is packed…

…with interesting mechanics to spice up the gameplay. It all comes together in the extra spins mode where three storybooks transport the Sultan into a deep sleep where his mind wanders freely around the Saharan dreamscape. In this place, the genie has even more power because he stays sticky throughout the extra spins mode.

And what’s more, the dreamland excursion can be prolonged if more magic lamps or storybooks land on the reels.

From the Sumo Ring to the Saharan Desert

The unveiling of this game set to debut in late September comes hot off the heels of the developer’s previous release, Yokozuna Clash, where players took on the role of a sumo wrestler fighting through a tournament to decide who is the best warrior in the land and worthy of fame and riches.

All the new games…

…come with the company’s BOOST gamification tool that is also a part of their table games selection.

The tool allows operators to run various promotional activities and gamify the experience for punters through missions, achievements, and rewards.

Yggdrasil is an award-winning game developer and casino content supplier that was founded in 2013 by Fredrik Elmqvist, the then ex-CEO of NetEnt.

The studio is known for games like Trolls Bridge and its sequel, Wild Robo Factory, and Incinerator.

It is also known for all their games coming with the BOOST tool which is a collection of promotional in-game tools that help operators make the most out of a title.