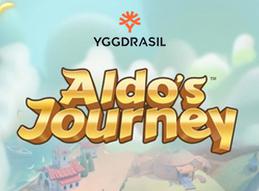 Game developer, Yggdrasil, has released a new slot offering that’s all about the wanderlust of traveling across the world looking for opportunities to strike it rich.

That’s exactly the reasoning for the game’s protagonist, Aldo, who is traveling around the Earth to explore new places and earn lots of cash.

And lots of cash it surely is, because there’s a 5x5 grid in play with a whole 65 paylines and that equals lots of chances for big wins.

“We can’t wait to take fans on this fun-filled journey around the world together with our adventurous merchant Aldo. While traveling through the game as they hunt for gold, players will find themselves in wondrous lands from Italy and China to Persia and Mongolia.

“Aldo’s Journey has fantastic graphics and is packed with fun features to keep players entertained and engaged, including Free Spin Symbols, bonus combinations, and Journey Wilds.”

Journey Across the World

Any journey across the world is treacherous and difficult but luckily punters will be helped along the way by some pretty amazing special features.

The first feature is Aldo himself because he’s so eager to travel that he constantly moves around the grid acting like a wild. He’s wild on every spin in a different location and substitutes for any symbol just like a normal wild.

But that’s not the only thing he does. Depending on where he’s located when the three bonus scatters hit, one of five extra spins modes will be activated all with their own special features.

The trip starts in Italy where a global multiplier starts at 2x and increases by one on every spin. The next leg is in Mongolia – and in this country of verdant steppes, every spin removes one type of symbol so that wins are easier to get.

As Aldo travels he will eventually go as far as Persia where one sticky wild is added to the reels on every spin. And the final destination is in China and the extra spins mode will start with a 2x multiplier while Aldo will generate wilds in a straight wild every time the reels spin.

Finally, there is a Journey extra spin round in which all these features are activated within the same round depending on where Aldo is on the reels.

That’s not all the features…

…because there is one more mode left in this video slot and it’s a doozy. It’s called Wild Time and it’s triggered when the wandering wild stops in the central space on the reels. In the base game, this means 3-9 random wilds and 2-4x multiplier.

The same effects are felt in the extra spin mode too.

This homage to traveling across the world is available right now at any casinos that carry games from this developer.

Yggdrasil was founded in 2011 by ex-NetEnt CEO, Fredrik Almqvist, and has quickly become one of the leading providers of games and casino software. They are known for many high-quality titles such as Jackpot Raiders, the Vikings Trilogy, Racing Lovers, and their recently released 9K Yeti.