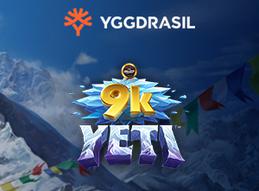 Game developer, Yggdrasil, is taking punters on a snowy mountain expedition in 9K Yeti, a game with 4096 ways to win and extra spins that can be retriggered for maximum excitement.

The Everest climb is set to begin in this new title that’s coming just in time for winter.

So, get your boots and winter coat on and try to beat the Yeti and claim up to x9000 the original bet in this 5x4 game with extra high volatility and the possibility of getting up to 880 extra spins.

Fitting for a game about a mountain expedition the graphics are chilly and snowed in. With a background showing Mount Everest which is one of the tallest mountains on Earth. The grind where the game takes place is also encrusted with ice for that authentic icy mountain feel.

And the symbols are all things one might find on a mountain. A mountain climber in full gear and a Sherpa to help guide him through the treacherous terrain. All the equipment is represented too with tents, ropes, and pickaxes rounding off the high paying symbols.

Another thing punters will find on this mountain is a yeti. That’s right, they’re real. At least in this video slot.

But the real climb starts…

…once the punters find three or more Yeti footprints because these are extra spins scatters. Getting only three will activate 8 extra spins but finding six will give out a whole 88 spins right out the game.

And as we mentioned before, the spins are re-triggerable.

Related to the extra spins is this offering’s main feature called Snowstorm. During the extra spin mode if there is a non-winning spin containing both the yeti symbol and the wild symbol the cold winds of Everest will blow the symbols around until a winning combination is formed.

In this way, losing spins are turned into wins.

Keeping up with the latest trends, the developer has paid special attention to the mobile version of the game. In the mobile version, punters can choose to play in classic mode where the reels are presented just like on desktop.

However, there is also a Big Reels mode in which the grid is rotated 90 degrees clockwise and they move right to left. The payouts are unaffected by this and it lets mobile players see the symbols better by increasing their size.

A game developer and casino content supplier that was founded in 2013 ex-NetEnt CEO Fredrik Almqvist, the company has become one of the leading names in the online gambling industry known for many top-notch offerings like Jackpot Raiders, the Vikings trilogy, and recently released Racing Lovers.

Recently, the developer has also made its Latin American debut with Patagonia Entertainment and their popular game Joker Millions has paid out an incredible 3 million euros to a lucky punter in Finland.