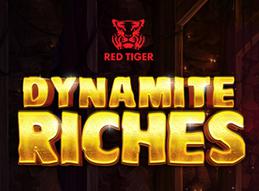 Game developer Red Tiger has just released an explosive new offering themed around gold mining. The 5x4 game with 20 paylines asks players to light dynamite fuses so they can activate persistent upgrades that will truly help them strike it rich.

The developer is promising guaranteed entertainment with this new release because of four different upgrades that change the conditions on the reels to be more favorable to the player and the Gold Spins round that serves as the extra spins mode.

With the win potential of 5000x, high volatility, and high hit rate this release is shaping up to be a dynamite offer for punters.

Fitting for a game centered around gold mining, the reels are set in a mine shaft with visible gold nuggets in the crags of the rock.

As the gold glitters the punters will try to collect Wild symbols and fill the gauge at the top of the screen which is presented in the form of a long fuse with a dynamite stick at the end.

Once enough wilds are collected the stick explodes and unlocks persistent gameplay features in order.

The first one to be unlocked removes low paying symbols randomly from a spin and thus increases the overall winning potential. The second one will add random wilds to the reels again in the hopes of creating more winning chances.

The third feature is all about multipliers. A multiplier will pop up and be awarded to the win on the next spin. Finally, once enough wilds are collected the fourth feature will unlock which adds mega wilds. These symbols are 2x2 or 3x3 and can help punters achieve massive wins.

There is an extra spins feature which is unlocked by bonus symbols in the shape of a mining cart full of gold. Three or more of those will activate the Gold Spins that come with a great twist – all the four random special features will be unlocked for the duration.

Red Tiger was founded in 2014 by a group of industry veterans and has a proven track record of casino game development in Europe and Asia. In their own words they “live and breathe casino slots” and their growing band of mathematicians, graphic designers, software developers, audio engineers, gambling experts, QAs, account managers are dedicated to improving player experience.

The company is licensed in many different markets such as UK, Malta, Alderney, and Gibraltar and has won many industry awards such as the EGR B2B 2019 awards for Mobile Gaming Software Supplier and Innovation in Mobile.

In September this year, the company was sold to iGaming giant, NetEnt in an all-cash deal that is reportedly worth around 200 million pounds.