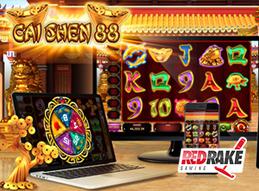 Casino supplier and game developer, Red Rake Gaming, is releasing a new slot experience inspired by and dedicated to the Taoist deity Cai Shen, the god of wealth and luxury.

The game called Cain Shen 88 and comes with five reels and three rows and 25 fixed paylines.

When it comes to design, it’s all about Far Eastern elegance with golden symbols that represent wealth and prosperity.

It’s a luxurious Asian-inspired theme that pairs well with the deity the team chose to represent in the game.

It’s not just the design that’s luxurious and opulent. So are the features in this game that can help punters win up to x1000 of their bet or even hit one of the three jackpots.

There is the minor, major, and grand pot which all bring big wins with them.

But it’s not just jackpots that can lead to a nice win in this game. The Wild symbol, which is Cai Shen himself, doesn’t just substitute for any other symbol. In addition to that, he brings random multipliers to every winning line he’s a part of.

The multiplier goes all the way up to a hefty 88x. That’s a lot of wealth right there.

But the fun truly starts…

…with the appearance of the Money Tree. They are golden bonsai trees and when three appear on the reels they initiate a roulette game where punters can land on one of four extra spins combinations, or if they are really lucky to gain access to the Chinese Lantern Minigame.

The extra spins come with different multipliers depending on which segment of the wheel has landed and it affects how much the wild Cai Shen symbol will multiply the wins it’s a part of.

As for the lantern minigame, it starts with three spins and all the symbols are replaced with lanterns that bear inscriptions of money values or one of the three jackpots. The objective is the get all the spaces to fill up. To help with this, every new lantern that fills up a spot will give out one additional spin.

The feature ends when all the spaces are filled or there are no more spins.

Red Rake is a group of more than 40 talented people that have been making online casino games since 2011. They started out in the social casino space before moving on o real money gambling. Since 2016, the company operates as a B2B content supplier to the word’s iGaming industry and it’s many casino operators.

Just recently, they have signed a deal with Hero Gaming Group to provide them with the entire portfolio of games.

Coming from the social casino scene, this developer understands the need for marketing and promotional tools and so their games come with back-office solutions to make promotions easy as well as a replay function that can be used to put a spotlight on any big win.