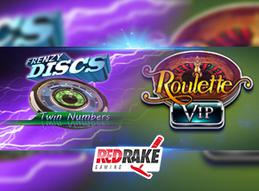 Game developer, Red Rake Gaming, has decided to shock and delight the igaming world by releasing not just one but two highly innovative RNG products that will help position them on the market as thought-leaders and help them stay one step in front of the competition.

The two new products in question are Frenzy Discs: Twin Numbers and Roulette.

These innovative games are based on the ever-popular casino game of roulette and Red Rake is hoping to get a bite out of the market of players looking for something fresh and different.

The developer has stated that Twin Numbers is only the first version of this game, and more will come soon.

But for now, Frenzy Spins consists of two discs where punters are trying to guess which numbers will come up. It’s easy as setting a bet and then choosing which number will come up on the outer disc.

For the inner disc, the winning number is chosen randomly. If the player gets both numbers right they walk away with x15 their bet. If the numbers are also the same, then there is a massive x400 multiplier!

If it’s only one number, the player will get x3 their stake.

The game is equipped with lovely and realistic 3D graphics and a true-to-life physics engine that brings the action and excitement to a fevered pitch.

The developer is also revamping its traditional roulette line-up with four new titles seeking to innovate and offer something for every punter’s tastes.

These four titles are European, French, American, and VIP.

Each comes with realistic graphics and stunning 3D effects while subtly altering the rules. The European version is the most vanilla as it is played with standard rules and 37 pockets.

The American version adds another pocket (the double zero) and the French version comes with “La Partage” where half of a single bet is recovered if the balls drop in the zero pockets.

And, of course, the VIP version is for high rollers as it allows for the highest bets of all the versions of the game.

A Million Ways to Win

The developer is no stranger to innovation as just recently they released Million 7 which is a game with a million active paylines and a host of special features and modes.

Giving homage to classic fruit machines while being fully stacked with the most modern and cutting-edge features such as multiple extra spins modes, a pick game, multipliers, and more.

News of new RNG games comes very soon after the company has signed a deal with Betzest and went live with their offerings on this rapidly-growing casino operator’s platform.

RRG is a content provider to the igaming industry and offers a substantial portfolio across many markets including Malta, Belgium, Italy, Spain, Portugal, Romania, and the UK. Coming from a strong social background, they are now applying their success in the social casino space to real money gambling.