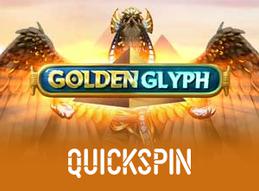 Game developer Quickspin is announcing a new release that will shake up their current roster with a revolutionary and innovative take on the slot vertical.

The title in question is Golden Glyph and it’s thematically linked to Ancient Egypt which is quite a popular setting for games.

What sets this offering apart from other brands’ products like Play’n GO’s John Hunter and the Scarab Queen is a totally different approach to core gameplay mechanics and real attention to detail that will bring this offering into the production level of high-tier mobile video games.

Clint Andersson, a producer at the company had this to say:

“When we started working on Golden Glyph, we wanted to create a game that felt like a classic puzzle or tile-matching game, like ‘Puyo Puyo’ and ‘Bomberman: Panic Bomber’.

We also wanted to combine the characteristics of these types of games with the power-up features of classic RPG games, like ‘Golden Axe’ or ‘Gauntlet’, where you get to collect and use power-ups to perform magic.”

He further went on to explain that the team fell in love with the idea of a circular bonus meter and worked very hard to incorporate it into the game. It was inspired by the classic RPG releases in which there are different icons representing all the bonuses… the team really wanted to bring that feeling back and incorporate it into their brand-new video slot.

What the team is proudest of is that they managed to fit such a complex game area on a rectangular mobile screen, making it look nice even on smartphone devices.

What distinguishes this game apart from the rest of Quickspin’s unique catalog is the massive 7x7 grind and the fact it’s a tumbling slot.

To explain, the tiles that were part of a winning combo disappear and make way for new ones to potentially create huge chains of winnings.

Consequently, the game’s various bonus symbols unlock further stunning features that make this title even more engaging and increase the odds of a favorable outcome for every punter…

It’s all about the Power Wild symbol, a special tile that activates bonuses when it’s part of a winning line. These bonuses come in the form of the Golden Scarab, Eye of Horus, Blaze of Fire, and Extra Spins.

The Power of Scarab

This feature spreads the wealth around by adding 4 to 10 wilds randomly to the grid. The Eye of Horus is magical and can remove all low paying tiles to transform them into payouts while the Blaze of Fire burns all normal symbols in a row that crosses its path and turns them into payouts.

The Free Spin mode contains a special Golden Glyph symbol that unlocks a huge win potential of up to 13,000x the original bet!

As one of the most successful Swedish game studios, Quickspin has developed innovative slots for the igaming industry in both the real money category and free-to-play social casino markets. Today, their games are integrated into online casinos using a proprietary platform that enables ground-breaking promotional tools to help attract and retain players.

They are known for making smash hit games such as The Wild Chase, Sticky Bandits, and Ark of Mystery.