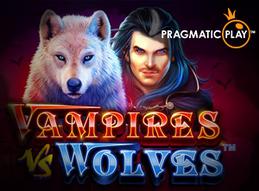 Leading casino content provider, Pragmatic Play, has announced a new release – this time focusing on the age-old question – who would win in a fight between vampires and werewolves?

The developer is finally answering the matter in their latest title Vampires vs Wolves, a 5x3 game featuring high volatility, gothic romance stylings, and two kinds of extra spin modes.

With graphics resembling the covers of an Anne Rice novel, a deep foreboding atmosphere, and creepy sound effects, fans of the immortal bloodsuckers will be more than satisfied.

“We are delighted to release our latest video slot, Vampires vs Wolves.

“Its smooth gameplay, combined with an immersive theme and thrilling bonus feature, makes it one of our most exciting slots yet, and the graphic animation adds a whole new level of engagement to the title.

The new title joins the ranks of other successful games by this developer such as Jurassic Giants, Lady of the Moon, and Leprechaun Song Xmas.

Aside from the expected high paying and low paying symbols, wilds and scatters…

…the main feature of this phantasmagoric offering are the two different extra spin modes.

When the scatter symbols confined to reels one and five (one a howling wolf, and the other a moonlit creepy castle) land together at the same time the players are presented with a choice.

It’s a Team Edward vs Team Jacob situation where punters will have to ask themselves a deep and personal question. Which do I think is cooler – vampires or werewolves?

...because each of the extra spin modes comes with some great gimmicks.

The Wolf spins award 14 spins and all three of the main characters of a cast of six who are the high paying symbols will transform into their wolf forms and become wilds. All the wolf symbols will, therefore, substitute for each other.

The Vampire mode will see any vampire symbol (the other three main cast members) that lands have a chance to become a sticky wild.

This new release comes hot off the heels of a very busy period for the casino content supplier.

They started off August with a bang, by managing to obtain a recognition notice from the Malta Gambling Authority.

This is a big deal as it is pretty much the same as a license because it allows them to begin supplying its live casino and live bingo products to MGA-licensed operators.

Continuing the upswing, the company also signed a deal with casino operator Betzest, one of the fastest-growing operators on the market.

The Latin American market is attractive to many igaming companies because many nations there have begun to regulate their markets and Pragmatic has already made moves to conquer it.

They are now one step closer because of a contract recently inked with Codere, who is one of the biggest players in the LatAm market.

It’s definitely been a good month for Pragmatic, who are best known for their slots and live casino offerings that are filmed in ultra-high resolution and feature real professional dealers.