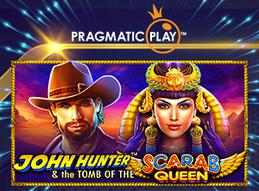 Developer and casino content supplier, Pragmatic Play has announced a new game and the sequel to their most beloved series of slots featuring their fan-favorite character.

That means John Hunter is back again in another archaeological adventure this time set in ancient Egypt.

After discovering the treasures of Da Vinci and trekking through jungles to find ancient Aztec treasures the adventurer strikes out again in John Hunter and the Tomb of the Scarab Queen – the newest release by Pragmatic Play.

“John Hunter & the Tomb of the Scarab Queen is a thrilling new addition to our John Hunter series, which is a staple of our portfolio.

“We are always looking to develop exciting content, and the John Hunter games give us a great platform to develop a fascinating story with a great character.”

The theme of the game is Egyptian pyramids and the riches that are hidden within and so the features in the game drive that point home with some interesting mechanics revolving around the money symbol and several different money-collect features.

…because depending on the kind of symbol that lands the feature is more than just standard money collect.

The golden scarab symbol lands on reels 1,2,3, and 4 of this slot game and bears an inscription of various money amounts. But on its own, it doesn’t do anything. It’s only when a money collect symbol appears on reel 5 that one of several effects will come into play.

In addition to the standard collecting, there is also Extra Collect which adds the amount on the collect symbol to the amounts displayed on the money scarabs. There is a multiplier collect as well which will multiply the money symbols amount and payout the total.

There still is more…

…as the expand collection will expand the scarab to cover the whole reel and new random money amounts will be added to the win. Finally, the respin symbol will hold all the scarabs in place and spin the reels again for a chance to increase the total amount of winnings.

There are extra spins as well, as we’ve come to expect from releases like these. The twist in this mode is that the money symbols that show up are added to a prize pool which will put a giant scarab symbol on the last spin. And if they collect symbol appears on reel 5, the punters walk away with the huge prize.

The news of John Hunter’s return comes very shortly after the company signed a deal with the Austrian iGaming giant Interwetten which will see its extensive catalog of slot games become available across the operator's many brands in different markets.

Pragmatic is a game developer, live casino content producer, and general supplier to the operators in the gaming industry. They are well-known for their innovative slot games and their high-end live casino offerings which feature blackjack and roulette tables staffed with real professional croupiers and filmed in ultra-high-definition.