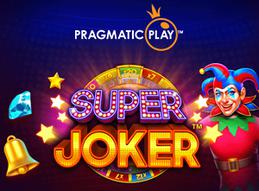 One of the leaders in game development and live casino content has announced the addition of another slot game to its already immense portfolio.

The newest addition is called Super Joker, and it’s a 3x3 game with five lines recalling the classic days of fruit machines and land-based slots with evergreen symbols such as bars, fruits, and diamonds.

Classic leanings are balanced out by a plethora of super-modern features that reinvent the old formula in this newest offering by Pragmatic Play.

“Super Joker is an exciting take on a simple, elegant theme. The game has an immersive soundtrack and fun feel to it, and the multiplier mini-game takes it to whole new levels.”

Just because the theme is classic, doesn’t mean the features are and the developer has made sure this offering has something a little bit extra.

That is not all…

…because the slot’s standout feature is a Double Multiplier Wheel which activates when the entire playing grid is covered by the same symbol including any wilds.

Two wheels appear, a lower and an upper one bearing different win multipliers. The lower ring spins first and can award up to x5. But if instead of that the UP symbol is hit, the upper ring will start spinning and offering anywhere from 7x to a whole x20 multiplication of the win.

The developer has had quite a busy month behind them, as news of this newest offering comes right after the company has signed some hot deals and published a hot game in Hot Chilli.

Hot Chilli is another interesting take on a classic 3x3 slot, this time reimagined as a chilli bowl full of scrumptious vegetables and meats that replace the standard symbols for a more quirky and fun experience.

On the partnership front, the casino supplier has made deals with Betzest, then Latin American Codere, and finally Austrian iGaming giant, Interwetten with which they have signed a contract regarding live gaming content which is another thing the developer is famous for.

These deals are important…

…because they let the company spread across multiple regulated markets in different continents. This a key strategy we’ve been seeing from many game companies and it shows just how globalized the iGaming market has become.

Pragmatic is a game developer, live casino content producer, and general supplier to the operators in the gaming industry. They are well-known for their innovative slot games and their high-end live casino offerings which feature blackjack and roulette tables staffed with real professional croupiers and filmed in ultra-high-definition.