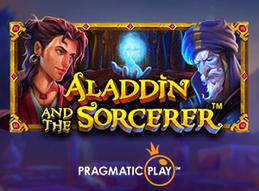 The 5x3 grid is the site of a fearsome battle between the protagonist and the evil Sorcerer who wishes to steal the magic lamp and use the genie’s powers for evil.

While the magical battle rages on the punters profit because wild symbols and respins follow in the wake of the supernatural showdown.

“Aladdin and the Sorcerer is an enchanting new addition to our best-in-class slot portfolio.”

“The action-packed title boasts exciting features, an immersive storyline, and massive payouts, giving players a shot at their own fairytale ending.”

Clearly inspired by the famous stories from the Middle East, the game has an appropriate atmosphere with the grid being set in an arid desert canyon where the two magical forces do battle.

The symbols are all based on precious stones driving home the point about the genie being a way to get untold riches.

The battle starts when the two wild symbols representing Aladdin and the Wizard appear on reels 1 and 5 at the same time.

This is when the battle and the respins start with reels 1 and 5 being covered with sticky wilds. From here on Aladdin and the Wizard, both have three health bars and they fight to see which one will emerge victoriously.

If the Wizard should win the feature ends. But if Aladdin does, then punters are admitted into the second level of respins with even more bonuses and chances to win.

The second level awards three additional respins while all the wild symbols from the previous round remain sticky and in place.

In the second respin all the wilds have an x2 multiplier while in the third respin the multiplier is x3. These multipliers are applied to any win containing the wilds. And if there is more than one multiplier in the winning combination they will be added together.

…is just one more in a series of new games that the developer publishes regularly. Last month has seen the return of one of the most popular characters in igaming with John Hunter and the Scarab Queen and the reinvention of classic slot machines in Super Joker.

Pragmatic is a game developer, live casino content creator, and supplier of various software to the global igaming community. They are known for their high-quality and innovative games and their live offerings feature versions of blackjack and roulette tables staffed by professional dealers and streamed in ultra-high resolution.