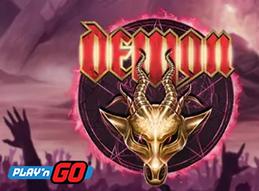 Developer Play’n Go is dipping into the music slot scene yet again with their newest band collaboration which is available now to punters worldwide.

The title in question is Demon and represents a collaboration with the eponymous UK band who were the pioneers of the new wave of British heavy metal back in the 70s along with bands like Motorhead and Def Lepard and together left a large and indelible influence on global rock music.

After the success of 2018’s House of Doom and more recently the collaboration with Sabaton the developer is back in the groove for another musical title featuring songs from the band’s catalog.

“The thing that sets Demon and our other music slots apart from others is the fact that the bands are part of the creative process so, not only do we bring our usual levels of creativity and entertainment to each slot, but we really capture the spirit of the band, giving it that something extra.

The demon is another great release for us as we move into the final stretch of this year, ensuring that we finish this year with the consistency and strength we’ve shown across 2019.”

What really sets this offering apart…

…is that the band was intimately involved in the production of the game. Not only does it contain some of their biggest hits for the punters to enjoy while they’re spinning the reels but also a totally new and exclusive song Devil Rides Out which is a bonus unlockable track in the game.

That isn’t the whole extent of the band's collaboration with Play’n GO as the band will also be releasing a whole album based on the game with artwork taken from the slot and which will include the bonus track.

It’s a first of its kind cross-promotion in the history of iGaming, showing the effort the developer put in to be innovative and fresh.

…there game has some very hardcore features in addition to hardcore music. The title features two different kinds of wilds and interesting mechanisms by which other symbols can turn wild as well.

The extra spins feature also contains multipliers and an additional feature within a feature that can be retriggered.

This is the first new game the developer has put out…

…since signing a deal with the Spanish-based multinational operator Codere which will see them expand into the regulated and highly lucrative LatAm markets including Mexico and Columbia.

Play’n Go is a Sweden-based game developer and casino content supplier founded in 1997 and was producing slots and other casino games since its inception. Today the company is known for its high-quality games which are mobile-friendly push the limits of innovation.