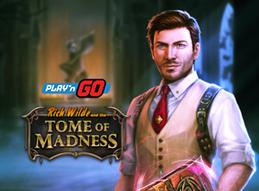 Play’n Go’s player-favorite character, Rich Wilde is back in this gloomy and maddening adventure based around the works of H.P. Lovecraft.

The Call of Cthulhu was published back in 1928 and has captured imaginations since with many authors still contributing new stories in what is called The Cthulhu Mythos. Now, the mythos is getting its first video slot entry courtesy of the leading supplier.

Fans of this developer will recognize Rich Wilde from his many other outings such as Pearls of India, Aztec Idols, and Book of the Dead.

That Is Not Dead Which Can Eternal Lie:

Now, Wilde will embark on his most dangerous and deadly adventure, yet as he tries to uncover the truth behind the sinister Cult of Cthulhu, will he succeed, or go mad? That’s for the players to decide as they take this slot for a spin.

For fans of horror-themed slots, this will be a real treat.

And with Stranger Aeons Even Death May Die…

Play’n Go has made this a cascading game with a 5x5 grid. Players will have to match 4 or more symbols in a cluster to win. Ditching the classic payline format, the symbols only need to be touching horizontally and/or vertically.

Adding to the frenzy is the portal system which activates after a certain number of wins and allows the players to face the Old One himself – Cthulhu. He will act as a mega wild, bringing big wins to those who can bear his horrific visage.

It Was Always in the Plans to Bring Back Wilde:

Reflecting on the success of the character and his games, Play’n Go CEO, Johan Törnqvist, elaborated:

“Of course, it was always in the plans to bring back a character as popular as Rich Wilde, players love him and his games, so it was just a case of finding the right adventure for him to go on.

With our ambitions for 2019, we also felt now was a good time to bring him back into the fold and make him part of what will be our most successful year so far, and I’m sure he’s not finished yet!”

Wide’s newest adventure is live now and available on desktop and mobile platforms.

This release comes hot off the heels of the company being crowned, ’Mobile Supplier of the Year’ at the EGR B2B Awards as well as nominated in five categories at the Women in Gaming Awards last April.

The company serves as a supplier of gaming content to many of the world’s leading casino brands. Their omni-channel solution is highly adaptable to the needs of their partners. Developing their games in HTML5 allows them to provide an enhanced user experience on all devices and operating systems.