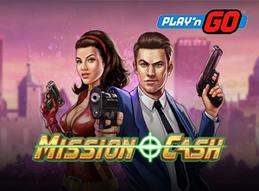 Play’n GO is on a mission, a mission to get cash. You might call it a cash mission but they are calling it Mission Cash, and it’s a brand new game from the Swedish studio taking liberal inspiration from 60s spy classics such as Mission Impossible and The Man from UNCLE.

The title comes with 5 reels, 3 rows, 20 fixed paylines and a host of high-octane features to keep the adrenaline pumping on this groovy spy mission.

Play’n GO is banking that this mod squad adventure will thrill and delight players with bright graphics and 60s fashion and styles.

The company CEO, Johan Tornqvist, had this to say about the new release

“Mission Cash is based on a well-loved theme, and we’re bringing the fun and excitement it generates into this game. Players will love how we’ve captured the essence of the genre in the look and the gameplay.

We’re approaching the end of the year but, after Mission Cash, there are still plenty more titles to come. We’ve performed strongly throughout 2019, and we intend to continue that through the final quarter and into 2020.”

It wouldn’t be a spy caper without guns and lots of them and this game comes equipped with lots of them. It all ties into the Wandering Crosshair feature.

On every spin, in the base slot game, a crosshair goes across the entire board and if it lands on the high paying symbols they expand to cover the entire reel and become wilds. This triggers the Take the Shot feature where the reel is held in place and the rest of the reels respin. If the crosshair lands on Agent Blue or Agent Red again the feature will keep going but if not, then it will end.

There are of course extra spins…

…which get activated by the crosshair landing on the scatter symbol and during this mode, all the agents can become expanding wilds with respin and if the crosshair should target the scatter again more extra spins will be awarded.

From The Tombs of Egypt to 60s Spy Action

The release of this game is a continuation of the developer’s busy but regular schedule who have previously put out Rise of Dead, an Egyptian-themed game with mummies and mega stacks and randomly activated base game features to make everything dynamic.

A game supplier based in Sweden who has been making online slots since 1997. Known today for being one of the partners in Microgaming Quickfire platform and for producing a number of well-regarded games such as Cloud Quest, Banana Rock, and Rise of Olympus and for their regular release schedule which sees many games released every year.

All their games are also mobile-friendly and based in HTML5.