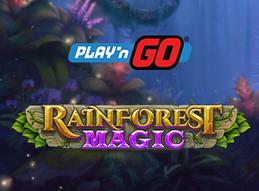 Developer Play’n GO is bringing magic back in a new game available now with all casino operators who offer their titles.

The latest slot release is named Rainforest Magic, and it represents a vibrant 5-reel slot set in, as the name says – magical rainforest.

Of course, that’s not all the game has to offer as it also comes with an enchanting feature called Mystery Symbols who show up after a spin is complete and open up chances for potential new wins!

Johan Tornqvist, the CEO of Play’n GO, expressed his delight about the new release with the following words:

“Rainforest Magic is a simple, easy to play game, that is going to delight plenty of players in the market with its fun features and great design.

It marks the start of the final quarter of the year, but we are continuing just as strongly as ever. We intend to finish 2019 with a flourish and move straight into the business of conquering 2020!”

Representatives from the Swedish-based software company have also announced that the studio will continue to deliver premium casino products according to its rather demanding schedule by the end of the year, assuring all fans that the production rhythm will remain unchanged in 2020.

The developer has been quite busy in the last quarter of this year releasing games and making strategic partnerships with top-ranking casino operators and sportsbooks.

From Demon to Codere and GentingBet

One such release is a 30-payline slot Demon, that pays tribute to a famous English heavy metal band from the ‘70s. It was developed in collaboration with current band members and represents a unique slot product for igaming since the band provided an entirely original soundtrack for development and gameplay to boost engagement and deepen the experience.

Lastly, the company entered into a content deal Codere, a Spanish multinational operator that has rounded off a very productive period for the igaming corporation.

The Rainforest of Magic

Play’n GO’s latest slot offering comes with vibrant graphics, colorful creatures and exciting symbols that help punters create more wins. Players can also expect a spree of combos in this high-profile release including a few new things to keep everyone on their toes…

Among the specifics about this game is the Mystery Symbols gimmick which adds matching items to the reels and reveals them after the spin is complete to ramp up the mystery and expectation.

Furthermore, there is the graceful panther Wild symbol which not only substitutes for any other symbol but grants free rounds if three or more appear on the line, ranging all the way up to a sizable 30 spins.

Although based in Sweden, the developer has offices in other igaming hotspots such as the United Kingdom, Philippines, Malta, and Hungary. The studio has been making online slot games since 1997 and is now considered a pioneer of the online casino gaming revolution.

Play’n GO is also known for its stable GAT casino platform which offers multiple solutions to operators, as well as for being one of the key partners of Microgaming’s Quickfire network. Currently, the manufacturer’s Tome of Madness and Game of Gladiators are deemed highly popular in almost every online casino with Wild Rails and Rise of Dead to follow.