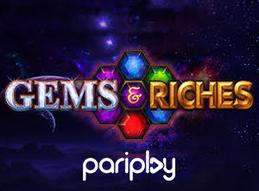 Game developer, Pariplay, has released a new game that pushes the envelope of slot games by changing not just the entire look and feel but the gameplay mechanics themselves.

The game is called Gems and Riches, and it’s all about, you guessed it, gems and riches but also upending the status quo of game design with a totally new paradigm that forgoes classic reels and paylines in favor of a new hexagon-based approach.

The developer, known for such games as Rio Fever, Rumble Rhino, and Dragons of the North is banking on this new concept to entice players into a futuristic adventure with the promise of innovative features and four-tiered jackpots.

“Gems & Riches is a one of a kind video slot, inspired by a popular and successful land-based game, which Pariplay has brought to the online world for the first time. Moving away from the classic slot layout, the game will have players eager to earn tremendous rewards through its unique hexagonal design. Gems & Riches also packs distinctive features geared towards both casual gamers and real money slot enthusiasts.”

There are no standard reels in this title, so its structure is quite different than what most punters are used to. It all revolves around hexagons of which there are 9 arranged in a 1-2-3-2-1 pattern. Winning combinations are attained by clusters of matching gems connected horizontally or vertically.

As such there are no traditional paylines, but there are 176 ways to win.

The main feature of the game is the Hold and Respin. This is activated by a cluster of four or more white gems all bearing different money amounts on them based on a multiple of the current bet.

The positions on the grid that are not white gems will respin three times. Any time another white gem is revealed, a sum of money will be added to the total. Or if the player gets really lucky, one of the four jackpot tiers with the highest MEGA jackpot paying out a whopping x500 of the original bet.

All the sums are tallied together and paid out after the mode ends.

From the Past into the Future

This futuristic take on slots comes shortly after the developer has released a Viking-themed game harkening back to Scandinavia’s past and everyone’s favorite pillagers, the Vikings.

Pariplay is a leading provider of games and casino platforms. They offer state-of-the-art in-house developed platforms and integrated first-party and third-party games. Founded in 2010, the company has offices in Tel Aviv, Sofia, Gibraltar, Isle of Man, and India.

The company is also known for its commitment to responsible gaming and offers innovative takes on policies and tools embedded within their systems to make gaming a safe and enjoyable pastime.