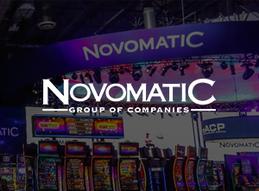 International gaming distributor Novomatic is using a unique opportunity at this year’s G2E in Las Vegas to present an entirely new suite of products, including games scheduled for a recent release in Q4.

The Austrian company is also taking a shot at the largest gaming expo and conference in the world by presenting its linked progressive jackpots, casino management systems and sports betting solutions such as the ActionBook.

…as one of the highlights of the upcoming software line-up is also the game Samurai Beauty, an Asian-themed slot game.

The company CEO, Harald Neumann, commented in the run-up to G2E:

“The United States is an important growth market for NOVOMATIC – together with Ainsworth we intend to significantly increase our market share in the medium term. This is why we are once again presenting ourselves together this year.”

He went on to elaborate on the growing importance of the United States market for iGaming companies which occurred as a result of liberalizing the sports betting market.

Likewise, the group is closely monitoring this situation with great interest and has cooperated closely with international service providers to further develop and innovate in the sportsbook sector.

“Therefore, innovations and our presence at the G2E are key factors for success,” Neumann concluded.

The gaming aggregator has a controlling stake in the Australian company Ainsworth Game Technology and is presenting at the event jointly with them for the third time.

The United States market is not the only one the company is interested in as their interactive division Green Tube has recently signed a deal with E-Play24, one of the biggest operators in the Italian market.

This will see the entire portfolio of games go live in this European country which has been on the radar of many gaming corporations recently.

This move has increased the company’s wealth by approximately 104 million Euros, which were reportedly paid in cash by Inspired Entertainment.

Novomatic Group is one of the biggest international producers and operators of gaming technology that employs more than 30,000 people worldwide.

Founded by entrepreneur Professor Johann Graf in 1980 the group has a presence in more than 50 countries and exports its products to more than 70.