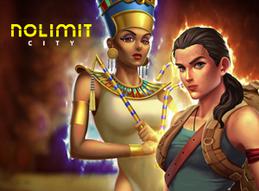 Game developer, Nolimit City, is introducing its newest slot offering dedicated to the one and only Egyptian Queen, Nefertiti.

Nefertiti was the queen who ruled during some of the most prosperous times in Ancient Egypt, so it’s very fitting that her life is now being translated into a real money game.

Now the studio is calling upon punters to embrace their inner explorer this November and start hunting for those big bonuses and wins.

“Tomb of Nefertiti’s main game will captivate you with its random features and multiplied wins in the overall respin mechanic, all to keep you enthralled until you reach Nefertiti’s place of rest – where you as the Raider may carry home the riches of the ancient Egyptian Queen, thanks to the unlimited increasing win multiplier.”

Fitting for a slot game about a queen noted for being beautiful and rich the features on offer are all about wilds, respins, and giving a chance for more and more wins.

Starting out, every time there’s a win there’s a chance to win again because the winning parts of the grid will respin and any wilds that might be present on the reels will stay in place. And that’s not actually the end because the win respins also have a multiplier ticking up from 1x to 3x on the third respin.

Additionally, there are two more base game features that can trigger and shower the punters with chances for big hits. The first is Wild Raider and it places guaranteed wilds on the central reels. Up to nine wilds can appear bringing with them many possibilities.

The other feature is the Curse of Nefertiti in which all positions on the central three reels feature the same randomly chosen kind of symbol. Any symbol can be chosen except the Bonus scatter.

Speaking of the bonus…

…the game’s version of extra spins is called Raider Spins and it’s activated when three or more scatters appear. The three bonus symbol award 10 goes but every additional symbol gives out 5 more attempts.

During this mode, every spin activates the Wild Raider feature with at least one wild appearing on the reels.

There’s also a big surprise in store with the number of win lines switching from 20 to a whole 40. And finally, during the extra spins mode, the limits on the win respin are removed and the multiplier is unlimited.

Nolimit is a Malta-Sweden based developer and casino platform provider offering high-quality content and services to various sectors of the igaming industry. Their platform is designed in-house and it delivers a strong and powerful engine that can handle large volumes of play and social interactions.

They are also known for making top-shelf games such as the recently released innovative game Hot 4 Cash and the Norse-inspired Thor: Hammer Time.