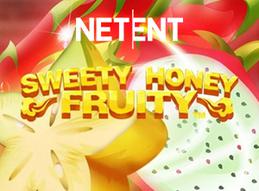 Game developer and casino vendor from Sweden, NetEnt is dipping into the Asian-themed well once again with their new game that’s all about juicy and sweet fruit.

The game in question is Sweety Honey Fruity and it’s a medium volatility slot arcade with five reels and 15 paylines.

Using Asian melodies and themed around sweet fruits, it’s another addition to the ever-expanding lineup of China and the Far East inspired games which punters and developers alike just can’t seem to get enough of.

“Asian-focused titles are a key part of our game release roadmap as we develop the theme within our portfolio in response to player and market demand.”

“Sweety Honey Fruity quickly follows the successful launch of Twin Happiness and we have two more entertaining titles lined up before the end of the year. With each slot having its own unique style and features, we’re developing the offering for all types of slots fans.”

The game is all about sweetness as well as juicy fruits, and that follows through into the features which are as just as scrumptious.

To increase winnings and intensify the gaming atmosphere, Stockholm-based developers have included a wild symbol which not only substitutes for any other fruit but also multiplies all gains by a factor of 2.

Another important feature comes in the form of a cornucopia of free rounds because any winning combination with matching fruits (the high paying symbols) awards a certain number of extra games.

…during free spins all wins give out more rounds – even the low paying card numbers! The game is a true bonanza for all punters who are fans of this slot mechanic.

The developer has been in the news recently for two very interesting reasons. Firstly, the company decided to shake up its already existing live casino products by launching the Network Branded Casino, a suite of products aimed at making it easier for operators to customize the player experience.

Featuring several tiers, multiple roulette and blackjack tables that punters can move through without ever going back to the lobby, it’s really a captivating experience that benefits both casinos and players.

NBC also features the all-new Perfect Blackjack offering which is about teaching and practicing the best strategies to novice players.

The good news doesn’t stop there…

…as in late September the studio had a huge jackpot hit to the tune of 3.3 million Euros that a lucky British slot player won playing the popular Mega Fortune game at a popular online casino.

NetEnt is one of the largest development companies in the igaming world with games and live offerings being present in a vast number of both land-based and online parlors. The group is best known for its cutting-edge products as well as for being the mastermind behind Starburst which still tops the charts and is beloved by both operators and players worldwide.