NetEnt Continues on the Asian Roadmap with “Who’s the Bride?” Wedding Slot 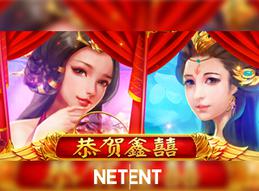 The iGaming behemoth developer, NetEnt, is continuing on its Asian-inspired roadmap with a new offering centered around the traditions and visual identity of Asian weddings.

With beautiful symbols and harmonious background music the slot is a 5x3 affair with 9 paylines and represents a new effort in the developer’s goal to expand to the Asian markets with games that will appear to Asian audiences.

“Who’s the Bride? is a simple, yet beautifully-crafted slot. It’s a perfect union of graphics, sound and gameplay with high volatility and simple, proven mechanics.”

This game is part of the developer’s Asian roadmap of monthly releases of games targeting the Asian markets and punters.

An occasion as grand as a wedding needs grand features too and the developer has made sure they stack up by including some very interesting ones.

First off, there are is the wild symbol featuring a young woman in a veil that will stand in for any other symbol in the game.

The symbols are all based on items used in traditional weddings such as shoes, pearls, and various other culturally specific artifacts.

There are also the fortune cookie scatter symbols that pay even if they’re not on adjacent reels but more importantly trigger 12 extra spins if three or more land anywhere on the grid.

Once the mode starts, the sticky wilds come out to play. They are represented by five young beauties (maybe one of them is the bride) who will stick around on the reels once they appear.

They also allow for extra spins to be retriggered if one or more of them appear on all the reels.

The extra spins confer a global x2 multiplier on all wins made during the mode adding to the excitement.

This release is the latest in the developer’s Asian roadmap of games made to appeal to that specific market.

Previously they have released Sweety Honey Fruity which was a loving tribute to all the juicy and delicious fruits that grow in the region.

The roadmap also includes the title Twin Happiness, another game inspired by Chinese motifs which guarantees two identical reels on every spin to punters.

NetEnt is the leading provider of casino software and games to the global gaming industry. The company has over 200 games in their portfolio featuring different themes and gameplay mechanics. Their systems have handled more than 44 billion gaming transactions in 2018 alone.

Recently, the developer has also put out a Halloween-themed game The Wolf’s Bane.