Microgaming Teams up with Slingshot Studios to Roll out Banana Odyssey 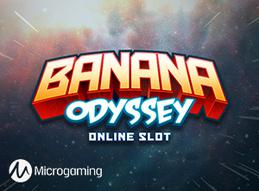 Get ready to travel through space to visit the Banana Planet in 5x3-reel, 10-payline online slot, Banana Odyssey. Launched exclusively for the Gods of gaming, Microgaming, the anticipated title was created in partnership with Slingshot Studios.

The creators of Zombie Hoard and Cash of Kingdoms, and owners of the globally popular jackpot, Mega Moolah, joined forces to deliver a feature-packed adventure. The creation is now available exclusively to Microgaming partners.

Let the Journey across the Galaxies Begin!

Following Buck and Chip, two astro-chimps on a stellar mission towards the Banana Planet’s legendary riches…

… the space-themed video slot hosts a collection of high-energy features such as expanding wilds and re-spins. Paying out both ways, the creation takes players on an astronomical adventure across the galaxy in search of great fortune.

Things start to go bananas when the wild symbol hits one of the three middle reels and expands to fill the entire reel, activating the cosmic re-spin feature. When this feature is triggered, the expanded wild remains locked in place as the remaining reels re-spin. Any extra wild that hits the reels is a unique chance to trigger even further re-spins, significantly boosting potential rewards.

As the mission across the galaxy goes on…

Besides having a great deal of humor, energy, and attitude…

… the game is packed with punch and visual clarity and balanced with mathematical and aesthetic personality. Such a clear style makes the win potential easy to track. The game pays both left-to-right and right-to-left, giving it a fantastic hit rate.

Proud for the successful launch, Richard Vermaak, Head of Studio at Slingshot, declared as follows:

“There’s never a dull moment on this adventure. Our intention was to make players feel like they are constantly progressing on a journey with brothers Buck and Chip to the Banana Planet. The music and visual effects highlight the heightened potential of the various states in the game, whether it be base game, respins or free spins, drawing players into the intergalactic atmosphere. We cannot wait for players to experience the exhilarating journey in Banana Odyssey. “

James Buchanan, Director of Global Operations at Microgaming referred to the newly-launched title as a “testament” which proves that the company is capable of delivering a diverse, quality content portfolio which meets the needs of our operators.

The release was originally conceptualized by Twin during one of the leading developer’s interactive games concept days with operators. After a two-month exclusivity period with the provider, the slot is now available to the wider customer base.

Commenting on the collaboration with Slingshot, Buchanan announced as follows