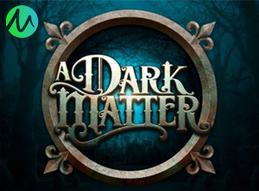 Microgaming, the award-winning industry giant, is continuing its longstanding tradition of third-party collaboration by releasing, A Dark Matter.

It’s a new and spooky experience created by Slingshot Studios and it comes just in time for Halloween.

A five-reel game with high volatility and a mysterious cast of characters, this entry in the casino suppliers catalog of third-party titles has everything it needs to be a holiday hit.

“Slingshot Studios have successfully created a high volatility slot experience with an engaging storyline, intricate artwork, and atmospheric sounds. The addition of Invading Wilds and bidirectional paylines offers an exciting and rewarding gameplay experience, with win potential of up to 2,400x the player’s bet during free spins.”

Commenting for the game developer, Ricard Vermaak, head of the studio, pointed out how the developer was very excited about the game’s release and how the whole team has invested a lot in crafting rich a world for the punters to enjoy.

The team’s aim, according to Vermaak, was to create a truly theatrical experience and infuse the game with real intrigue by focusing on world-building details like high-quality character portraits and a sense of mysterious foreboding.

Player’s will step into the shoes of Nathan Highmore, a paranormal investigator from Scotland Yard as he searches through the intricately designed Wraith Manor. It’s a place shrouded in mystery and menace, hiding many secrets.

“We can’t wait for players to explore A Dark Matter,” he concluded.

Since the game takes place in a creepy mansion that is still nevertheless lavish and opulent, the developer has decided to take a similar philosophy to the game’s features.

With bidirectional paylines which means that both ways win and the possibility to win up to x2,400 the original bet this is already one appealing way to spend Halloween.

But that’s not the end of it…

…as there are also what the company calls “Invading Wilds.” They can appear on reels 2 and 4 and they spread around to the other reels creating a block of six wilds. If they appear stacked, they invade the middle reel to create a hefty block of 9 wild symbols.

Bookending the features is the extra spins mode that finally brings players inside the enigmatic manner by opening the foyer doors and granting 12 extra spins once the three doorknocker scatters appear on the reels.

During the feature additional scatters can appear and each confers an additional spin. The invading wilds are present as well and when they take over the three central reels the winnings are multiplied by a factor of 2.

The slot is available this Halloween on at all casinos who feature titles from this supplier starting on October 22nd.

Microgaming is one of the largest igaming companies serving as both a game developer and platform provider to the world’s many operators. They are known for their high-quality games and which are produced both in-house and by third-party studios.

The company also maintains a tight release schedule having previously released Deco Diamonds Deluxe in cooperation with Just for the Win earlier this month.