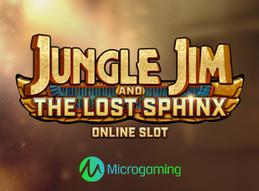 Game developer and casino supplier, Microgaming, is bringing back its beloved hero Jungle Jim for another high-stakes adventure in Jungle Jim and the Lost Sphinx.

It’s a rollicking adventure through ancient Egyptian ruins where players have a treasure to look forward to as well as innovative features coming courtesy of third-party Stormcraft Studios.

This marks the continuing of collaboration between these two companies as the independent game developer has already worked on Break Away Deluxe – a hockey-themed effort sharing much of the same features as this Egypt-inspired tale.

“We are so excited for the return of this iconic character in Jungle Jim and the Lost Sphinx. Jungle Jim is ready to dig up incredible rewards with a win potential of up to 6,250x. The combination of innovative game mechanics and a graphically rich visual experience makes this latest installment of Jungle Jim a game not to miss!”

And commenting for Stormcraft, Terence Igesund, Executive Producer expressed how the team was very excited to launch this long-anticipated sequel and how they set out to create a beautiful and highly engaging gaming experience loaded with innovative features and great win potential.

“The intriguing storyline supported by Jim’s entertaining antics should ensure that this game becomes a fan favorite,” he concluded.

To celebrate the return of one of their most popular characters the developer has equipped the game with some very innovative features.

Chiefly among them is the fact that the slot game starts out as a 5x4 grid with 35 paylines but extends to 5x5 and 50 whole paylines in certain conditions as the gameplay progresses.

This is because of the multiplier trail feature that works in conjunction with the game’s Rolling Reels function. The Rolling Reels are a tumble or cascade system in which winning symbols are replaced with new ones thus facilitating new winning combinations.

Every time this happens the multiplier trail lights up and multiplies the next win. Once it gets to 4x a top row is added to the grid to expand the playing field.

More to Look Forward to

There is a second chance feature that will give a re-roll if the third cascade doesn’t result in a win.

The paylines are also extended in the game’s extra spin mode which is triggered by three scarab scatters appearing on the reels.

This mode is followed by an animated scene change in which the hero, Jungle Jim, climbs down into a tomb to explore the riches within. He will do this with 12 extra spins in hand and a multiplier trail extension of up to 20x.

On his journey, he is also helped by the golden sphinx symbol which appears in the center reel and which grants additional extra spins as well as upgrades the multiplier.

Microgaming is an iGaming veteran who develops and publishes games and also provides casino management platforms for operators. It is known for high-quality games and a busy release schedule thanks to their collaborations with third-party studios. The most recent release before this one was Long Mu Fortunes.

Source: “Jungle Jim is back and ready for adventure in Microgaming's latest slot”. Microgaming. June 6, 2019.