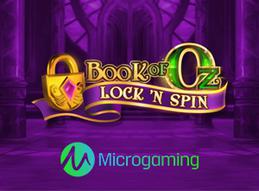 Casino content supplier and iGaming giant, Microgaming, is keeping up their intensive release schedule and third-party collaborations by announcing the release of Book of Oz Lock ‘N Spin.

This sequel to the breakout hit Book of Oz released last year comes from the developer, Triple Edge Studios, another independent studio in the supplier’s vast stable.

Augmented with totally new and exciting features, the developers hope to recapture some of the magic that the first title had.

Commenting for the independent developer, Brendan Walton, the Design Lead stated that the team loved creating the sequel while “producing another visually stunning and feature-packed game”

We believe the Hyperspins™ Lock ‘N Spin and 2nd Chance features provide another dimension of appeal to the overall gameplay, offering players a highly entertaining experience and great win potential,” he concluded.

The game retains the magical theme and whimsy of the first time while adding some new spins on the old successful formula with the addition of the Hyperspin mechanic found in other slot games by this developer.

Hyperspin allows for some interesting gameplay…

…because it lets punters lock reels in place and then try for a better outcome by respinning the rest. Whether to complete massive wins or try to get some extra spins, it’s an engaging and intense addition to classic slot gameplay.

Everybody needs a second chance sometimes…

…and this title delivers. When extra spins are triggered by landing three or more Book symbols on the reels a random symbol is chosen to become expanding and cover the entire reel unlocking the potential for greater wins.

But, if the punters think they can get a better one, they’re allowed a reshuffle with the possibility of upgrading the symbol to a higher paying one.

The expanding symbol unlocks the possibility of a massive win o up to 5000 times the original bet.

The intensive release schedule the casino supplier is known for is still keeping up. Shortly before this newest title is released the company has released two games in the last two weeks.

Aurora Wilds is a game inspired by the natural phenomenon of northern lights with features such as expanding wilds, re-spins, and paylines that pay in both directions. Tweethearts is a slot take on the famous lovebirds. A game with a love theme also features an innovative gimmick called Double Lucky Line in which the central line of the game area is doubled up allowing for up to 10 of a kind wins.