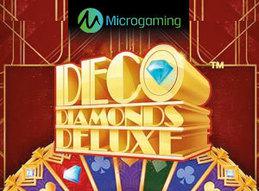 The world of speakeasies and glamorous opulence awaits in this exuberant title that transports all who play it to a time of gin and jazz.

Developed for the iGaming giant by frequent third-party collaborator Just For the Win (JFTW), who has already produced games like Tweethearts for the casino supplier, this title promises all the fun and excitement of a more sophisticated time.

“Building on the popularity of the original Deco Diamonds game released in January last year, Just For The Win has successfully built a captivating sequel. The Just For The Boost with Deco Diamonds Deluxe Symbol Nudge is a perfect addition to this title, allowing for the opportunity to turn near-misses into fantastic wins and triggering a spin on the coveted Bonus Wheel.”

And on the side of the game developer, Johan Person, CEO commented,

“Deco Diamonds Deluxe is a glamorous, art-deco inspired slot with all the charm and excitement of the Jazz Age. Glistening diamonds, fruits and a full cast of glittering symbols zoom across the reels in this fast-paced title complemented by a superb soundtrack. Deco Diamonds Deluxe pairs new mechanics with enhanced original features to create a truly spectacular game with the potential for significant rewards.”

The has a top-notch presentation…

…with graphics inspired by the art deco artistic movement meaning it’s full of small details and curved lines which suggest opulence and luxury, completely fitting for a gambling game.

Adding to this atmosphere is a period-appropriate soundtrack featuring a jazz number with scatting and a jaunty tune that’s quite the earworm.

Of course, there are some interesting features too…

…in the spirit of the roaring twenties. The main special feature is the Bonus Wheel which comes in three tiers – silver, gold, and diamond. Which of these will punters get to spin depends on the number of Deco Diamonds Deluxe symbols that land on the reels.

The payouts are handsome and the wheel can also upgrade itself if the arrow stops at the “level up” segment.

Finally, there is also the Just for the Boost feature which increases the bet by 50% and unlocks the nudge feature. If the wild symbol is just outside of the grid, the nudge feature will return it for a chance at a big win.

One of the biggest casino suppliers in the industry, this company is known for its high-quality games, produced both in-house and by third-party studios and their jackpot networks which is one of the largest in the entire industry and has paid out more than one billion euros to date.

They have been the pioneers of online gambling having been established in 1994 right at the cusp of the digital gambling revolution.