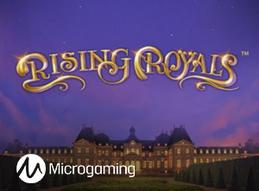 Microgaming is continuing its grueling release schedule by partnering with Just for the Win and getting ready for a royal bash in Rising Royals.

It’s as opulent and decadent as it sounds in this 5x3 game with 20 paylines that features an unmistakably royal atmosphere.

That’s because it’s set in Versailles, the royal palace of the French monarchy. As punters start playing they will be greeted by the high paying symbols which consist of the royal family.

Johan Persson CEO at Just for The Win said

Rising Royals is an elegant and incredibly fun new title complete with powdered wigs, jeweled shoes and a whole cast of royal characters! Utilizing the Symbol Lock Re-spin and Symbol Upgrade features, players have a chance to achieve magnificent fortunes. We are so excited for players to experience this feature-rich game with endless glamour, class, and nobility.

This third party developer has already produced games for Microgaming such as the recent releases Tweethearts and Deco Diamonds Deluxe.

The newly released game is all about the royals and their opulent lifestyle as they spend the night in a luxurious soiree.

And the features revolve around jus that because it’s all about getting as many respins as possible. Any royal symbol that’s part of a winning line will trigger a respin. And the respins keep coming as long as the same symbol keeps appearing.

That’s not all though, because the symbol upgrade meter is also in play. This gauge that’s located to the left of the grid keeps track of how many respins have passed and once that number hits four – the symbol will be upgraded to the next highest paying one.

In this way, it’s possible to get long chains of winning combinations for some truly big wins.

Just for the Win

JFTW has previously contributed with Deco Diamonds Deluxe, an art deco-inspired game that’s all about diamonds and luxury, and with Tweethearts – a lush and tropical offering centered around a pair of lovebirds.

James Buchanan, Director of Global Operations at the publisher had this to say

“Just for The Win’s latest creation is an entertaining online slot that is equally rich in both graphics and features. The Symbol Lock Re-spin and Symbol Upgrade combine to add tremendous excitement with players looking for a full grid of the Rising Royals symbol, offering the potential for fantastic wins.”

This studio is far from the only collaborator as the recently released title Volatile Slot from Golden Rock Studios shows.

The software house is known for third-party collaborations and also for being a game publisher and platform provider to many casino operators around the world.