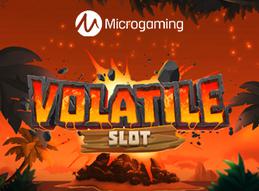 In an exclusive partnership with the newly formed, Golden Rock Studio, the iGaming giant Microgaming is dropping a new kind of game experience based around one of the most interesting properties of slot offerings.

It’s all about volatility in this title set to release on the 11th of November and developed by Golden Rock, a UK-based studio founded by industry experts James Curwen and Will Mathieson.

Volatility (also called variance) is the property of games that describes how frequent the hits are. In low volatility games, the hits happen more often but the wins are smaller. The opposite is true for high-volatility games.

The appropriately named Volatile Slot is all about high variance, multiple wild types, and stacking multipliers.

“With more than 15 new games in the pipeline, Golden Rock Studios are set to broaden our range with fresh and diverse content. Volatile Slot is an impressive debut title and is now available across Microgaming’s entire customer base following a two-week period of exclusivity with LeoVegas.”

Speaking on behalf of the game development studio James Curwen, the CEO said how proud they are to team up with the publisher and how they are looking forward to providing them with many more exclusive games in the coming months.

“Our first release, Volatile Slot, delivers an exhilarating, high-volatility gameplay experience and is filled with stimulating game mechanics and vibrant visuals. This slot is by its very nature, volatile, and if the volcano erupts, the level of the extremity is taken to a whole new level for the player, with the maximum win at a 25,600 times stake!”, he concluded.

With the appropriate name and theme come appropriate features in the shape of two different types of wilds symbols. The Volcanic Wilds appear on reels 2,3, and 4 and substitute for all symbols. Any wild of this type can randomly become an Exploding Wild and start awarding random multipliers of x2, x3, and x4. Multiple exploding wilds will be multiplied together up to a maximum of x64.

That’s not all the wilds do…

…since any three of them will also activate the extra spins mode. During this mode, the chances of exploding wilds appearing are higher leading to potential big wins and the feature is also re-triggerable.

This new release is that latest in the igaming giant’s portfolio which is updated regularly and often. Just last week Jungle Jim and The Lost Sphinx was released with help from third-party studio Stormcraft.

The release followed after Fortune Factory’s effort Long Mu Fortunes which was released at the beginning of this month.

Microgaming is an iGaming powerhouse that serves as both a game publisher and platform provider to many online casinos. The company is known for its top-notch games which are produced both in-house and by a large roster of third-party developers.

Source: “Microgaming heats up its portfolio this November with Volatile Slot”. Microgaming. November 11, 2019.