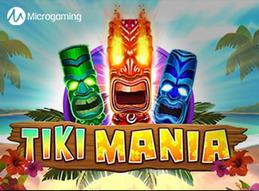 Microgaming and Fortune Factory Studios are teaming up again after the studio recently brought Long Mu Fortunes to the global iGaming audience.

From Asian-themed offerings to Hawaiian-inspired high volatility the studio is hoping for another hit.

In this newly released five-reel ten-payline game, punters have a lot to look forward to as the high volatility makes the gameplay unpredictable and engaging while the special features like respins and multipliers increase the odds of a big win.

And there’s a jackpot feature too, just to sweeten the deal.

Commenting on the new release for the development studio, Phelan Sykes Head of Game Production, said how creating the animated and tropical world of the title has been an enjoyable experience for the studio and that they can’t wait for the players to experience this game.

It’s all about the tikis in this beach party extravaganza because they are totally wild. The tiki torches appear as stacked wilds and the Red Tiki will always nudge to cover the entire reel.

When this happens, a respin is triggered which brings the chance of another win.

And during the respin, there is a possibility that other multicolored tiki symbols can appear which have multipliers on them further increasing the win potential.

Respins aren’t the only thing Red Tikis do, because they are also the gateway to the jackpot feature. Each symbol will give a coin and with each coin, there is a chance for the jackpot being won. There are two pots – the major and the grand.

…there is an extra spin feature activated by the scatter symbols appearing. Ten extra spins are awarded and there is an entry prize as well. Just by triggering the round punters will immediately get 2x of their bet.

A great thing about the spins is that the respins and multiplier wilds are still active during this mode too.

This game represents another entry into the publisher’s line of high-volatility slots coming right after the release of the aptly named Volatile Slot that was developed in conjunction with Golden Rock Studio.

…volatility (sometimes called variance) is a measure of how frequent the hits are in a slot game. Low volatility means smaller hits that happen more often while the opposite is true for high-volatility. Hits (wins) will be less frequent but will usually be bigger.

With this release, Microgaming is also continuing their prolific release schedule of one game per week and Tiki Mania and Rising Royals are the latest releases for November available right now in the many online casinos that carry titles from this game supplier.