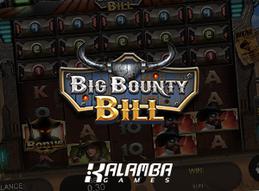 Game developer, Kalamba Games, is asking players to join Big Bounty Bill on a journey to the Badlands in a quest to apprehend a gallery of villains and reel in some big prizes in a totally original retro-futurist adventure.

The intense pursuit through this original take on the Wild West is packed with trademark features from this developer that let punters play the game their own way. Truly brave gunslingers will have a hefty x5000 of their bet in winnings to look forward to with gameplay gimmicks like HyperBonus and Persistent Hyperspins to help them along the way.

Fitting for a slot game themed around the Wild West, the graphics are all about capturing the atmosphere of Western films and comic books. Everything is very dusty and made of wood and the scene is fixed at high noon.

But there are twists because this a retro-futurist effort, so you’ll see such things as satellite dishes, electric towers, and fully automatic guns.

It’s what would have happened if the gunslingers of yesteryear had access to some super-advanced technology.

And when it comes to gameplay features…

…they are totally advanced and high-tech. First off, there are the Persistent Hyperspins. How it works is that the game starts out as 5x4 grid but over time by getting expansion symbols (in the shape of a fancy revolver) the blocks that hide extra rows are shot down revealing more of the gird.

The full grid is a behemoth 5x7 thing which contains 16807 ways to win.

Next up, it’s the Hyperspins bonus round which takes place when three or more expansion signs land on the reels.

During this mode players also collect the expansion symbols, but the hidden rows are revealed quicker for some truly big wins.

There is an extra spins round triggered by three bonus symbols. Once the mode is on, there is a global multiplier of 2x applied to every win. Collecting expansion symbols happens here too with every expanded block adding one more extra spin.

Finally, for those who are too trigger-happy to wait for the extra spins round to happen on its own, Kalamba’s trademark HyperBonus feature is present in this title and lets punters buy entry into the mode in the hopes of winning big.

Kalamba is a game developer and casino software supplier to the social casino and real money gambling industries known for such games as Caribbean Anne. It’s an international game studio based in Malta and Krakow and was founded in 2016 by industry veterans with great experience in social gaming, real money casino, and B2C and B2B operations.

Their focus is on creating games that bring the best from the social market into RMG and adding gameplay elements that drive engagement and revenue for operators.