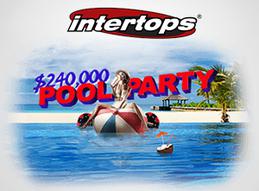 The summer months are known for hot temperatures and a lot of fun in the sun. Intertops Casino is taking advantage of this by giving you something exciting to do while you cool off inside. It comes in the way of their $240,000 Pool Party promotion that's running this summer through September. You'll have several ways to win some serious money in this event.

There are three different ways to get paid. First off, this promotion will have a $30,000 leaderboard that happens every week, and a total of 300 people will get paid each week from that. At the end of the promotion, there will also be a $1,000 cash prize drawing for all of the players who placed in the top 20 in any of the weekly leaderboards. Finally, each Thursday during the event will see 50 players win free bonuses in a drawing for players who have been active recently.

You'll earn points on the leaderboard based on how much real money is wagered during the week, and you'll need to deposit at least $75 during that time to qualify. If you make it in the top 20 of any of those leaderboards, you're automatically put into the drawing for the $1,000 cash prize at the end of the promotion. For the Thursday drawings, everyone who deposits at least $25 between Monday and Wednesday of the same week will be entered. These are basically giving you chances to win some serious prizes for playing how you normally would, which is the best type of promotion.

Intertops is constantly putting on big promotional events like this. They are giving you a chance to win by playing your favorite games, no matter what they are. You don't have to be a big spender to get in on the action either, and that comes from the fact that they always make these events as accessible as possible to everyone. With such a strong game selection thanks to software from different providers, this casino has plenty to offer every type of player. Come get in on the action now and get a piece of the $240,000 in prizes being given away.