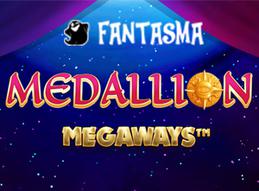 Game developer, Fantasma, is launching a new and innovative take on slot games to be enjoyed exclusively by punters at LeoVegas online casino brands.

A two-week exclusivity deal means players at this brand will be the first to experience this totally new concept forged by the developer who is known for their unique and quirky takes on classic one-armed-bandit experiences.

Their newest creation is called Medallion and it’s a six-reel, six-row game featuring the Megaways system licensed by Big Time Gaming along with several other gimmicks such as cascading reels and a chance to win up to 23,360 times the original bet.

“Our vision is to create slots that go beyond gambling, that create something more immersive and memorable for the player. Medallion is a true reflection of that – a really imaginative and game that has the power to delight and surprise. This is a completely unique game and we’re really excited to get it out there to the players.”

“We are delighted to add Medallion to our ever-expanding portfolio of mobile games. We think what the developer  is doing in the slots space is really exciting, offering titles that have that extra little bit of wow factor, that dare to be different, and Medallion is another amazing achievement.”

The developer is famous for using elements of video gaming in their offerings by creating a rich and otherworldly atmosphere as a backdrop for their slots, and this newest release is no different.

Under a starry night, a mysterious old tent can be found sometimes by those who are very lucky. Inside the tent an exciting night of mystery and big wins awaits.

The Megaways feature, a popular addition to many games, allows for a large number of possible winning combinations because it ditches the traditional payline format and only requires three or more of the same symbol on consecutive reels.

The innovations don’t stop there…

…as the game doles out various bonuses to the player based on the condition of the Feature Bar. The bar is located at the bottom of the screen and the feature stones fill up to create effects in the base game.

They are extra spins, expanding wilds, and a Void Respin feature.

The game will be available exclusively at LeoVegas for two weeks starting October 14th before getting a wide release at many other online casinos.

Fantasma is an up-and-coming game supplier established in 2017 in Stockholm by a team with deep backgrounds in the igaming industry. Their vision is to create “slots beyond gambling” and a focus on mobile-friendly titles.