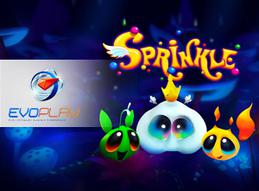 Game developer, Evoplay, is pushing the boundaries of slot games with their newest release which is focused on bringing iGaming into the world of immersive VR.

Virtual reality headsets have been a hot commodity in the world of PC and console video gaming and now it’s time for gambling to get its turn in the virtual spotlight thanks to this new release.

The developer’s 3D VR effort is called Sprinkle and revolves around magic mushrooms in a mysterious glowing forest where tiny luminous creatures arrange themselves in grids to bring big wins to lucky punters with features such as extra spins, wilds, and respins.

“We created Sprinkle to offer something entirely new to our players. The gameplay is a dream come true, taking players onto an entirely new level of immersive gaming.

“The tech that went into its development is some of the best the industry’s seen, and we’re delighted to become the world’s first development studio to have launched two 3D / VR in-browser slots.”

While this 3D offering is completely playable on desktop and mobile devices and features fully 3D graphics with the option to move the camera to take in the colorful surroundings, it truly comes alive when played with a VR headset.

It’s a game produced for the new generation of gamblers who enjoy cutting-edge features and technology borrowed from video gaming.

Unlike some VR experiences…

…Sprinkle doesn’t require an expensive computer and headset and can be played in VR on the mobile phone with any compatible headset. It’s a perfect way to bring VR gambling closer to the masses because it doesn’t require a huge cost upfront.

Once within the virtual world, the punters will be able to look around the virtual playing field and feel truly immersed within the mysterious night forest where luminescent mushrooms reveal large prizes and bonuses.

There are some pretty shiny features too…

…as the game offers extra spins and respins through the use of a special firefly symbol. If the firefly lands on any high paying symbol, then all symbols of that kind will be held in place while the reels respin.

During the extra spins round, all wild symbols become sticky.

Sprinkle in the last in a series of innovative titles from this developer which focuses on creating immersive experiences with strong backstories and themes.

Founded relatively recently in 2017, the company’s portfolio already features some of the most cutting-edge offerings the igaming industry has ever seen.

The developer has won several awards for their work on HD and VR capable titles which punters can enjoy on many online casinos brands that serve Evoplay titles.