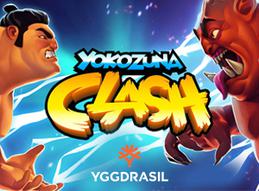 Game developer, Yggdrasil, is sending punters an invitation to a very special tournament. It’s an ultimate battle in the buzzing heart of Tokyo.

And it’s all about the biggest bunch of warriors anywhere on the planet. It’s sumo wrestling and everything is huge.

Yokozuna Clash takes players into the world of sumo wrestling as fighters strive to win the championship and claim big rewards. Fighting for the highest rank in sumo isn’t easy and that’s why each fighter brings a little something special to ring like multipliers and wilds.

“Yokozuna Clash has unique game mechanics that bring together the action-packed fighting element common in video games with our innovative slots features in a highly intuitive way.

“The game has a lot of incredible features in store and easily triggered extra Spin rounds. In extra Spin mode, the wrestlers reflect the happenings on the reels, adding more wilds or multipliers depending on the course of action. If players succeed in defeating the Yokozuna, the tournament is won, and players’ wins are doubled.’’

The fight is heating up in this tournament that takes place on a 5x3 grid and ditches the traditional paylines in favor of a more dynamic and exciting system. Any adjacent symbols on any reels are a winning combination and it doesn’t stop there.

Because it’s also a both-ways-win slot. Regardless of the direction, it’s still a win.

The first thing punters will notice about this game is that it takes place on a ring with the audience cheering and clapping for their favorite.

And that’s why the main event…

…is the fight itself. The sumo wrestlers clash with each other when a special feature is activated.

The feature is tied to the extra spins mechanic and collecting two symbols starts the tournament that everyone is dying to witness.

When the fight starts, it only ends when someone is outside of the ring, just like in real life.

The fighters grapple and try to push each other out and the deciding force is the direction of the wins.

If punters win, they go on to the next stage and a stage after that when they face off with the mighty Yokozuna himself. Succeed in beating him, and the tournament is over and the entire win is doubled.

Yggdrasil is an award-winning game developer and casino content supplier that was founded in 2013 by Fredrik Elmqvist, the then ex-CEO of NetEnt.

The studio is known for games like Trolls Bridge and its sequel, Wild Robo Factory, Dark Vortex, and Incinerator.

It is also known for all their games coming with the BOOST tool which is a collection of promotional in-game tools that help operators make the most out of a title.